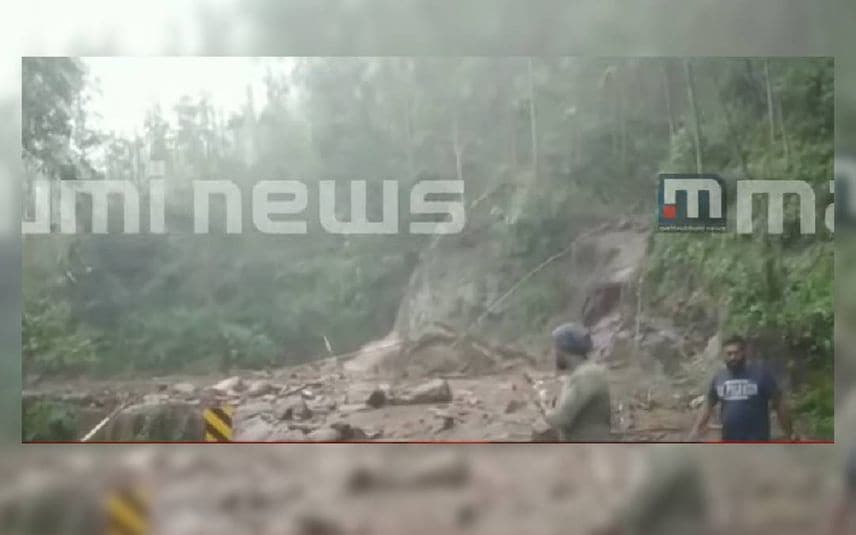 Visual from the landslide site / Photo: Screengrab of Mathrubhumi News

Munnar: Amidst heavy rain in Kerala, two incidents of landslides have been reported from Munnar on Saturday evening. In Puthukudi near Kundala, a passenger van was overturned and landed on an adjacent tea garden on the Munnar-Vattavada road.

Police officials from Mattupetty rushed to the spot. They located the vehicle some 700 metres downhill, a region which is frequented by wild elephants.

The driver, Vadakara resident Roopesh (45), is missing. He was unable to escape when the landslide hit, police said.

"The tempo traveller was part of a three-vehicle tour group from Vadakara. All other vehicles and passengers managed to escape but he is suspected to have been trapped inside the vehicle," Munnar police told PTI.

The landslide has disrupted traffic as vehicles are not allowed on the Munnar-Vattavada route.

Meanwhile, Idukki District Collector Sheeba George said the rescue operation has been halted for the night and will resume at 6 am on Sunday.

The operation was stopped due to lack of light and heavy rains, she added.

Another mudslide is reported at Yellapatty in Munnar.