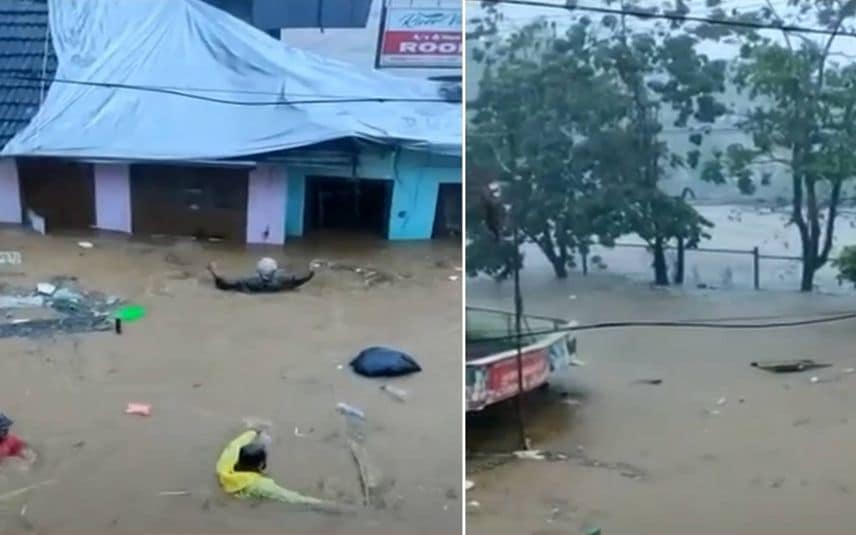 Kottayam: Heavy rain has triggered a landslide at Kottayam on Saturday. The landslide occurred at Plappally in Koottickal here. Three houses were washed away and 13 people went missing. As per reports, 6 people from the same family are also among those who went missing. MLA Sebastian Kulathunkal has informed that three bodies were recovered.

Huge damage was reported at Kootikkal following the heavy downpour.

“ 3 houses and a shop were washed away. 3 dead bodies have been recovered. As heavy rain and mudslides are continuing in the area, the rescue personnel are unable to reach the spot. People are completely stranded at Koottickal,” said MLA.

Panchayat president Saji Mon informed that three bodies were recovered following the landslide at Kavali region in Plappally. It is reported that Koottickal is witnessing the worst flood in recent years.

District administration authority has informed that road traffic is completely blocked by the heavy rain and flood. People are shifting to the second floor of the nearest house. The officials have been discussing shifting the people to safe spots.

The Chief Minister's Office has informed that help from the Air Force has been sought for rescue in Koottickalat Kottayam district where landslides have been reported isolating a few families.

At the same time, Punjar bus stop is completely flooded. The bridge that connected Enthayar and Mukkulam collapsed following the heavy rain and flooding.

"At least four landslips have been reported from various parts of Kottayam district. We have sought the assistance of the Airforce to rescue people who are stranded in Koottickalarea. We have received information about some people missing and over 60 waiting to be rescued as water entered their homes," said Minister Vasavan.

Kottayam and Pathanamthitta are the most affected districts in the state as of now due to heavy rains since Friday night.

Visuals have emerged on social media from various parts of Kottayam district, including a KSRTC bus stuck in flood water and locals rescuing passengers from it.

A CMO release said, "six teams of NDRF have been deployed in six districts--Pathanamthitta, Idukki, Alappuzha, Ernakulam, Kottayam and Idukki. Two teams of Army have been directed to be deployed in Thiruvananthapuram and Kottayam districts. Airforce has been requested to be on standby in case of any emergencies."

The CM also said a Red alert has been sounded for the dams under KSEB, including Kakki dam in Pathanamthitta, Sholayar in Thrissur, Kundala and Kallarkutti in Idukki.

A red alert has also been issued for Chulliyar dam in Palakkad and Peechi dam in Thrissur, which are under the irrigation department.