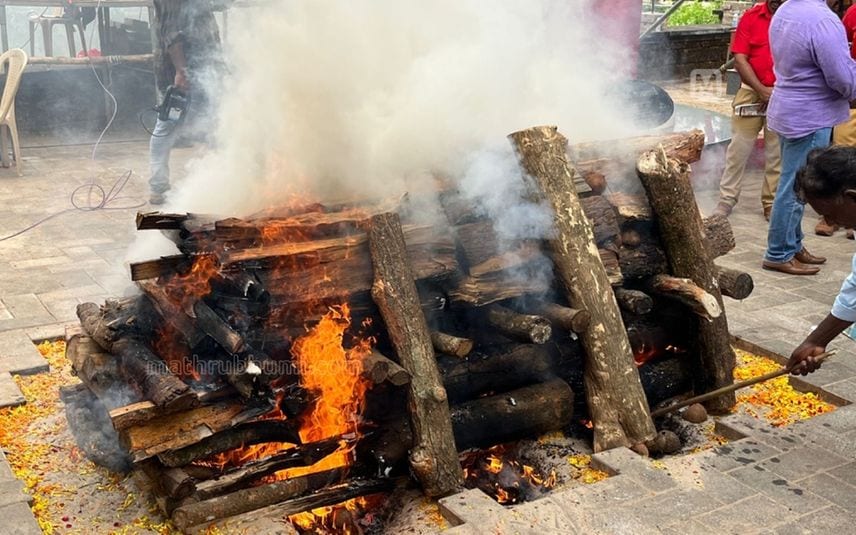 Kannur: Kannur witnessed scores of mourners and onlookers as Kerala bid adieu to CPM veteran Kodiyeri Balakrishnan with full state honours at Payyambalam beach on Monday. Sons Binoy Kodiyeri and Bineesh Kodiyeri lit the pyre and Kodiyeri was laid for final rest near the tombstones of former CPM chieftains EK Nayanar, AK Gopalan and Azhikodan Raghavan, among others.

CM Pinarayi Vijayan and CPM general secretary Sitaram Yechury were among those who carried the mortal remains to the pyre on their shoulders.

Pinarayi, MV Govindan, MA Baby, KK Shailaja, PK Sreemathy and others walked the 3.5 km-stretch funeral procession despite the scorching sun. The procession started from CPM Kannur District Office, where his body was kept earlier. Many showered flower petals on the way.

Though entry to the funeral site was restricted, thousands gathered around the premises to give final respects to their leader. The air was filled with slogans saying there is no death for the comrade and he will live through memories. The police had a tough time managing the crowd.