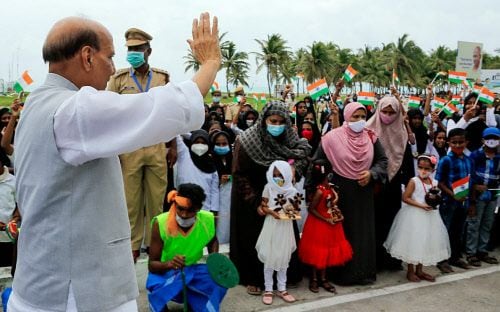 Kochi: In a major move by the central government to ease the ongoing rift in Lakshadweep, defence minister Rajnath Singh objected to the decision made by the island’s administrative body not to invite Lakshadweep MP PP Mohammed Faizal for the Gandhi Jayanti celebration. By this bold move, the BJP has rejected the stance made by the administrative body led by Praful Patel on the island.

"No one can question the patriotism of the islanders," Rajnath Singh stated in his speech while unveiling the statue of Mahatma Gandhi in Lakshadweep. The stance taken by the defence minister can be touted as the change in the policy of the BJP govt in addressing the concerns of the people by safely picking a warning shot at Administrator Praful Patel. Rajnath Singh corrected the decision made by the island administration not to allow Lakshadweep MP to attend Gandhi Jayanti celebrations.

The islanders have been in disarray with the central government for six months following controversial administrative reforms by island administrator Praful Patel. Meanwhile, the government has decided to celebrate Gandhi Jayanti extensively in Kavaratti. The decision to erect a statue of Gandhi as part of the celebrations was also aimed at putting pressure on the islanders to attend the ceremony.

The central decision to send the defence minister himself for the Gandhi Jayanti celebrations was aimed at gaining the trust of the islanders. However, the situation changed when the island government did not invite MP Mohammed Faizal to the ceremony.

Following this, ‘The Save Lakshadweep Forum (SLF)’, decided to celebrate Gandhi Jayanti separately. Due to concern that the islanders may not attend the event organised by the administrative body, Rajnath Singh directly contacted MP Mohammad Faizal and requested him to attend the event.

In his speech, Faizal said that some people were trying to mislead the people of the island by targeting Praful Patel. After the function, Rajnath Singh held a brief discussion with the MP to address the issues pertaining to the ongoing rift between the islanders and the administrative body.