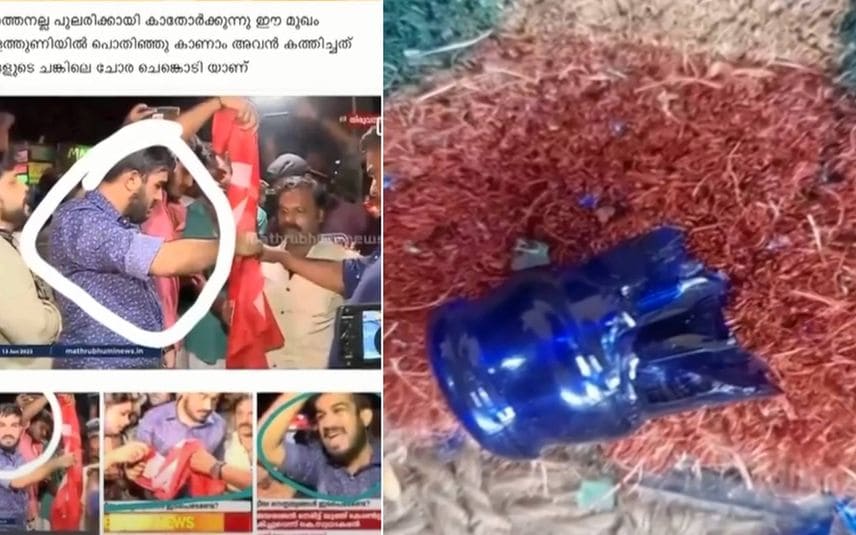 Thiruvananthapuram: Protests against the Chief Minister over the gold smuggling case turned into a dirty political game as political parties entered into a fracas. On Tuesday night, KSU district secretary Ananthakrishnan's house was attacked in Thiruvananthapuram. It is reported that some unidentified men had thrown a beer bottle at the house.

Following the DYFI attack on the KPCC office, Ananthakrishnan expressed his protest by setting the CPM flag on fire. Soon after this, he faced severe cyberattack over the incident.

Meanwhile, Ananthakrishnan alleged that CPM-DYFI men are behind the attack on his house. He informed that he was not at home when the miscreants attacked his house. Only his parents were at the house during the time of attack.

The capital city witnessed a series of protests soon after the CM returned to Cliff House. A ruckus broke out between Youth Congress activists and DYFI men near the KPCC office and office of MLA VK Prashanth on Monday. Ananthakrishnan had set the CPM flag on fire during this conflict. CPM activists strongly protested against the KSU secretary over this incident. It is learnt that his house was attacked in retaliation for the incident.

The attackers rushed to his house shouting Ananthakrishnan's name and asking him to come out. They also threw beer bottles at the house. Windowpanes of the house were destroyed in the attack.

Talking to Mathrubhumi news, Ananthakrishnan revealed that the four people reached his house by covering their faces and raising slogans.

"They hurled offensive words at my family. When my family members came out, the miscreants ran away. They also raised slogans in support of AA Rahim," said the KSU secretary.