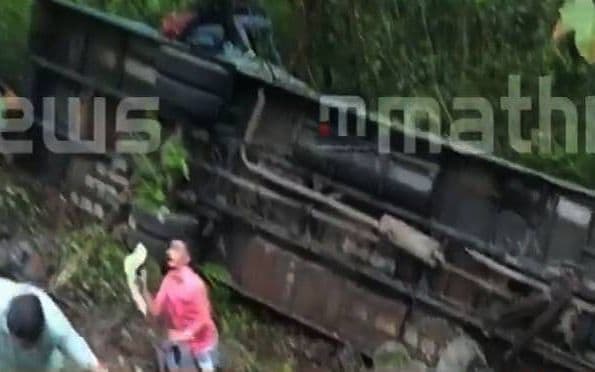 Idukki: One person was killed after a KSRTC bus fell off road at Chackochi curve in Neryamangalam here on Monday. The deceased is identified as Adimali native Sajeev. A total of 58 people were injured in the accident. According to reports, the bus en route to Munnar from Ernakulam fell around 15 feet down a hillside at Neriamangalam near here on Monday.

The incident happened in the morning at a place between Cheeyappara and Neriamangalam in the hilly district, they said.

"As per the latest report, one person lost his life. It seems like another person is also in a serious condition. We are yet to ascertain the reason behind the accident. The bus fell some 14-15 feet down a hillside," a senior police official from the district told PTI.

Police also said that they suspect that the tyre of the bus, which was coming from Munnar, burst resulting in the accident.

Meanwhile, bus conductor Subhash said there were 60 people in the bus.

"As soon as the accident happened, the locals rushed to the spot and started the rescue operations. The driver said some vehicle which came in the opposite way hit the bus. Since it was raining heavily, the window shutters were down and I couldn't see much," Subhash told PTI.

All the injured persons have been shifted to Kalamassery government medical college in Ernakulam.