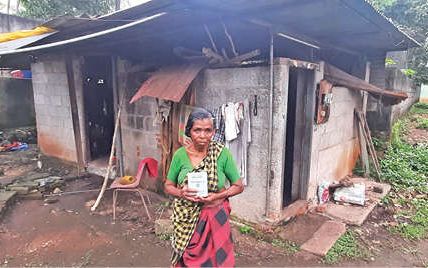 Gomathi in front of house

Moonnamoodu native Gomathi (68) has faced a bitter experience from the KSEB officials. She has been living alone in a house which is in deplorable condition. Her husband Babu had died years ago and her children Sini and Binu are out of the station. She has been making both ends meet with the money obtained through the rural employment guarantee scheme and the old-age pension.

Her distress aggravated when the income from the employment guarantee scheme stopped for the last three months and she could not pay the electricity bill on the last day, which was on Thursday. KSEB staff arrived at the house on Friday and disconnected the power supply.

Realising Gomathi's crisis, a youth who runs a shop in Moonnamoodu junction paid the bill via mobile app and passed the information to the Vattiyoorkavu KSEB office.

On that night she slept in darkness by keeping the only kerosene lamp in the goat shed. When the KSEB staff did not turn up on Saturday, she phoned the KSEB to enquire again.

" When I called the KSEB office, the officials informed me that the fuse was kept in my house itself and they asked me to fix it myself. But I gave up the attempt after getting an electric shock," said Gomathi.

On Sunday, she asked the help of a neighbour to fix the fuse. KSEB staff later visited the house the next day. Vattiyoorkavu section officer Sindhu informed that she was unaware of the bill payment and intervened immediately when she came across the incident.