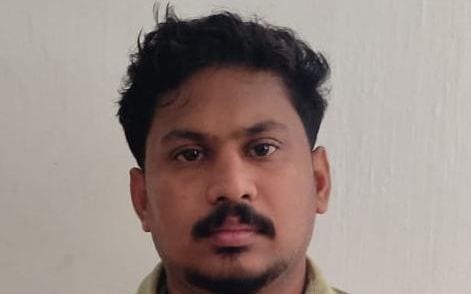 Kozhikode: Police arrested a youth who had stolen Rs 50,000 from his own residence in Mavoor. The investigation team arrested the complainant Punathil Prakashan’s son Sinish in connection with the theft case.

Sinish, who fell in a debt trap, robbed money saved by his father after breaking the cupboard. He had stolen Rs 30,000 a week ago for repaying the credit taken to buy his bike. When he came to know that the father had not identified it, he robbed the remaining amount also when his parents left for work. He took his wife to her house and returned alone to steal the money.

He mislead the police by wearing a shoe bigger than the size he usually wears. After embezzling the money, he dispersed chilly powder on the broken lock and the entire room. He deliberately left the footmarks of his shoes on the chilly powder lying on the floor. Later, left the sole of one of the shoes in the yard. He had also worn a paper cover on his hands to avoid the impressions of his fingerprints.

Sinish handed over the concealed cash and the hacksaw blade used to cut the lock to the police. Mavoor police inspector Vinodan, sub-inspectors Mahesh Kumar, Pushpa Chandran, ASI Sajeesh, and civil police officers Liju Lal, Laij and Sharafali were in the probe team.

Koyilandy: Ten-year old boy killed as train hits him while returning home from school with mother