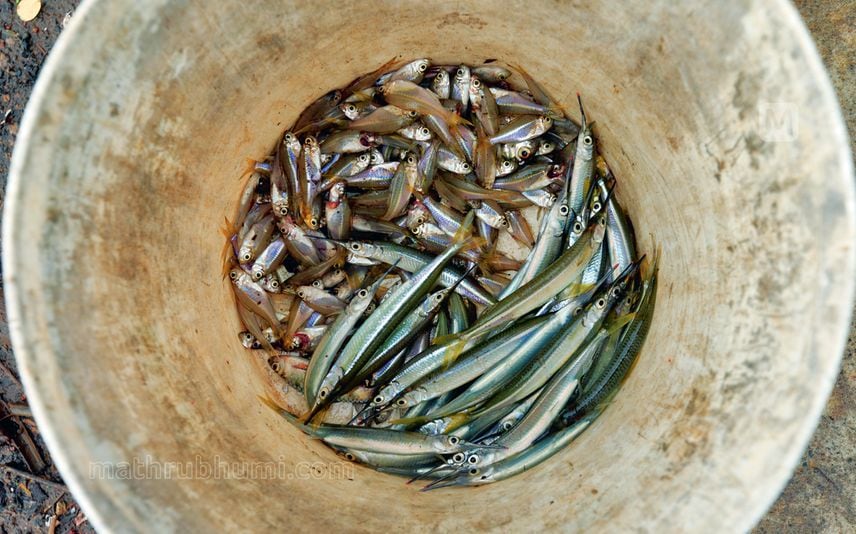 Thoppumpadi (Ernakulam): The state government slapped a huge fine on boat owners for catching juvenile fish from the sea. The boat owners said that the small fish get trapped on their fishing nets even after following the methods directed by the government. The fishing boats are in crisis due to this action.

The government banned catching juvenile fish with the Fisheries Regulation Amendment Act four years ago. The fisheries department also put forward some recommendations to avoid juvenile fish getting caught in the net.

The major recommendation was to increase the the size of the holes in the net. With this, the small fish can easily get out of the net even if they are caught. However, juvenile fish get caught in the net even after implementing these measures and huge fine is slapped on the boat owners and staff amid the Covid crisis, they complained.

There are fish of different sizes in the seabed. The fisherfolk realise that the juvenile fish also are caught in the net only after pulling it out. By the time, the small fish die. As there is no use of leaving the dead fish in the sea, the fishermen take it to the shore, the boat owners said. The fishermen venturing into the sea in traditional fishing boats keep away from catching the small fish.

The association of boat owners pointed out that Rs 40 crore was collected as fine from boat owners after the law was enforced. Apart from this, the authorities also seize all the fish in the boat and the income from selling it is added to the government's revenue. Upto Rs 2.5 lakh is levied as fine from the boat owners for catching juvenile fish.

The boat owners are already facing crisis resulting from fuel price hike and lack of fish. So, the huge fine slapped on them only multiplies the difficulties, said Joseph Xavier Kalappurakkal, state general secretary of the Boat Owners Association.

Everyone in the fishing sector welcome the direction to avoid catching juvenile fish as this helps conserve the fish during spawning season. The fisheries department said that action will be taken only if over 50 percent of the fish caught are juvenile fish. The boat owners alleged that the ban is only enforced in Kerala and fisherfolk from other states still catch juvenile fish from the sea.

Fishing with restrictions allowed in Kerala