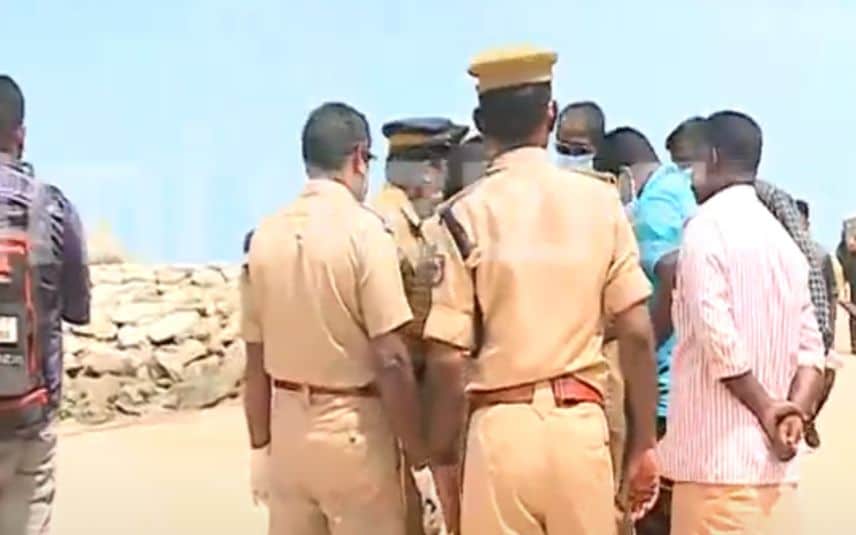 Police officials and local interacting on the spot where dead body was found / Photo: Screengrab of Mathrubhumi News

Thiruvananthapuram: In an important development to the missing case of a youngster from Azhimala beach, the family has identified the body found in Tamil Nadu to be that of Kiran. Kiran’s father and other family members identified the body based on the thread bracelet and from the pattern of fingers and toes.

However, police are waiting for the DNA report as the body was found in a deteriorating condition. Only after confirmation, the procedures to ferry the body to Kerala can be initiated, informed an official. The body has been found at Colachel, the same stretch of coastal line from where Kiran went missing.

The development further corroborates the allegations raised by Kiran’s family members on his whereabouts. It was on July 9 evening that Kiran, a native of Naruvamoodu, went missing. It is learnt that Kiran visited the Azhimala beach to meet his girlfriend. According to Kiran’s family, he was abducted by the family members of his girlfriend after a verbal dispute, reportedly over their relationship.

Kiran’s family members also doubt if he had jumped into the sea to escape from the attack of the abductors. Reports said that a dispute was ongoing between the girl's family and Kiran over their relationship.

Visuals of youth missing from Azhimala ...

For the last few days, the coastal police have been conducting a search for Kiran. There was no clue about him. However, one of his footwear was found near the beach on Sunday. Police also checked the CCTV visuals where he can be seen running from the spot. On the other hand, his girlfriend and her family are reportedly absconding. The new development comes amid this.