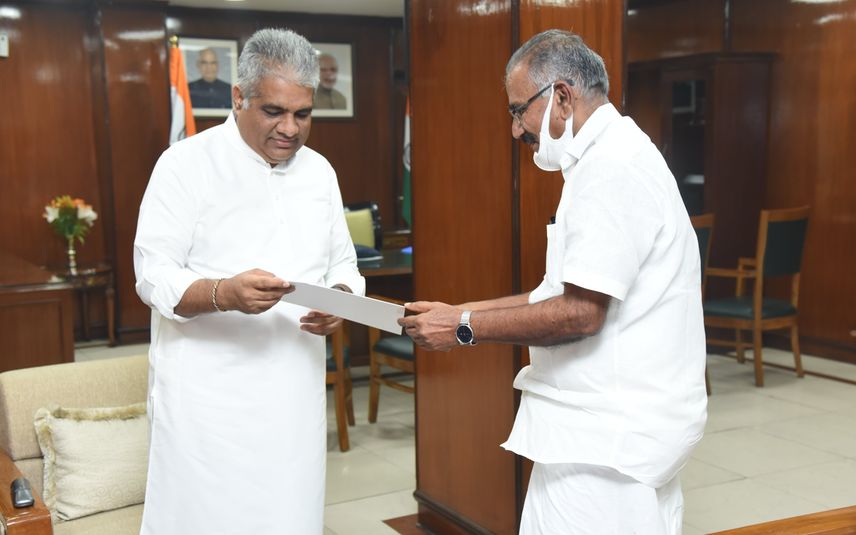 Thiruvananthapuram/New Delhi: Kerala Forest Minister A K Saseendran on Thursday said the State would approach the Supreme Court seeking exemption for inhabited areas while implementing its recent verdict on eco-sensitive zones (ESZ) and termed his meeting with the Union Forest Minister Bhupender Yadav over the issue as "positive".

The Centre informed that the respective States can go ahead with legal proceedings in the matter and welcomed the southern State's stand on the issue while its concerns in this regard were apprised to him, he said after meeting Yadav at his office in New Delhi.

"The Centre has a positive approach towards the State's demand. What I have understood from today's meeting is that they will do what they can do legally. During the meeting, the Minister welcomed our stand and ensured that the Centre will take all necessary steps. Our decision is to file our plea on the matter in the Supreme Court," Saseendran told reporters here.

The top court had, on June 3, pronounced the verdict to create a one-km eco-sensitive zone (ESZ) around all wildlife sanctuaries and national parks, which is generally considered to affect normal life of people living in such areas of the southern State for decades.

The Minister said the higher officials from the State, who accompanied him in the meeting, would stay back to coordinate the necessary steps to file the affidavit in the court next and complete the procedures by Monday.

As it is a matter related to the court verdict, the solution can also be found through the court only, he said, adding that the state would complete all the directives made by the apex court while pronouncing the verdict within three months.

The State government has the legal responsibility to fulfil the directives of the apex court and a necessary survey has already begun in this connection, he said.

When asked whether the Centre would also approach the Supreme Court over the ESZ issue, Saseendran said he expects so.

"Met Kerala Forests and Wildlife Protection Minister Shri AK Saseendran. We had a detailed discussion on issues related to the environment and sustainable development of the state. Assured Saseendran ji of full cooperation from Centre for conserving Kerala's environment," Yadav tweeted.

In the memorandum of requests submitted to the Centre, the Kerala government explained the special circumstances prevailing in the State and sought their intervention in the matter.

The revised proposals already submitted by the State government to the Ministry, excluding human settled areas and agricultural lands, may be considered and steps would likely be taken to issue final notification accordingly, it said.

"Steps may be taken to exempt the State of Kerala from the directions of the Supreme Court dated June 3, 2022 considering the special circumstances and population density of the State, in overwhelming public interest," the memorandum said and requested to take "necessary legal as well as legislative steps" to fulfil this.

The State requested amending suitably the guidelines dated February 9, 2011 for declaration of eco–sensitive zones around national parks and wildlife sanctuaries to cope up with the situations being faced by the States like Kerala and to protect the interests of common people and farmers settled along the forest fringes.

Earlier in the day, Saseendran made it clear that the Kerala government, in year 2020 itself, had requested the Centre to exempt the inhabited areas from the buffer zones being demarcated around wildlife sanctuaries and national parks.

Amid mounting pressure from the Opposition parties and the local people in high range areas, the Left government in Kerala on Tuesday announced that it was ready to "re-examine" a Cabinet decision taken by it two years ago demarcating 0-1 km surrounding the protected forest areas as eco-sensitive zone (ESZ) in the State.

The State Forest Minister had informed the State Assembly that they were ready for a re-look into the decision taken on October 23, 2019, which had been used as a political weapon by the Opposition Congress-led UDF to target the LDF government over the buffer zone issue.

The Kerala Legislative Assembly last week unanimously passed a resolution requesting the Centre to exempt inhabited places and agricultural lands in the State while implementing the one-km wide eco-sensitive zone (ESZ) around forests and sanctuaries as directed by the Supreme Court.