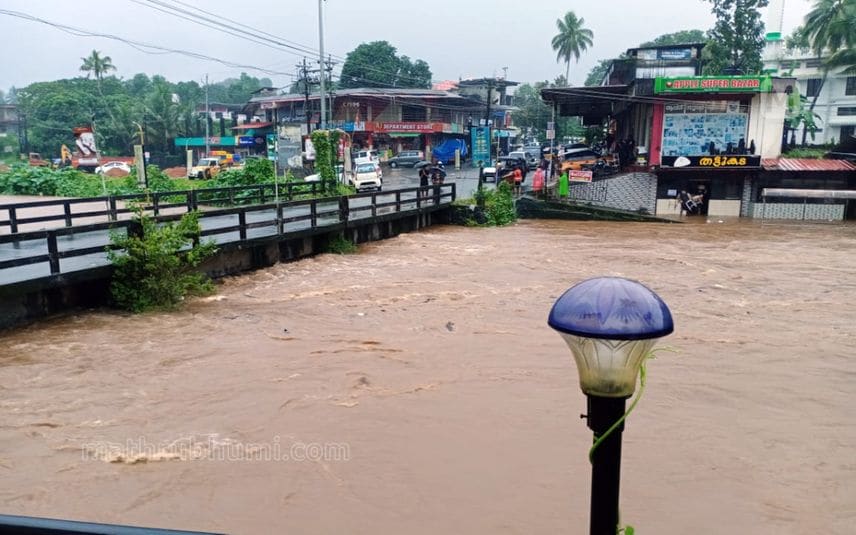 Thiruvananthapuram: Heavy rainfall has been reported in southern and central districts of the state. Due to the increase in the water level in rivers, canals overflowed at several places in Thiruvananthapuram, Kollam, Pathanamthitta, Kottayam and Idukki districts. Many roads were waterlogged following this.

In Poonjar, a record rainfall was reported in the last one hour. Peringulam-Adivaram areas were flooded and travel to Erumeli-Mundakkayam area has been banned. Traffic on Devikulam Gap Road in Idukki is also banned.

A family of four, including two children, were injured after a wall of a house collapsed due to heavy rain on Friday night in Kazhakoottam in Thiruvananthapuram. Binukumar, his wife Sajitha and children Abhijith and Abhitha were injured. It is reported that heavy rains lashed various parts of Thiruvananthapuram city till Saturday morning.

Heavy rains continue in the eastern part of Kottayam district. Areas like Poonjar, Mundakkayam and Elangad received heavy rainfall. The water level in Mundakkayam is rising significantly and the water level has come close to the alert. The Kanjirappally-Erattupetta road was flooded. Several houses in the area have been flooded.

Pathanamthitta has received heavy rainfall over the last three hours. The water level in Pampa, Achankovil and Manimala also rose. Authorities said bathing in Pampa would not be allowed as rain continues. The decision was taken not to open the Kakki-Anathodu dam.

The meteorological centre has predicted that there will be heavy rains on Saturday and Sunday. The low pressure formed in the Arabian Sea has also reached the coast of Kerala.