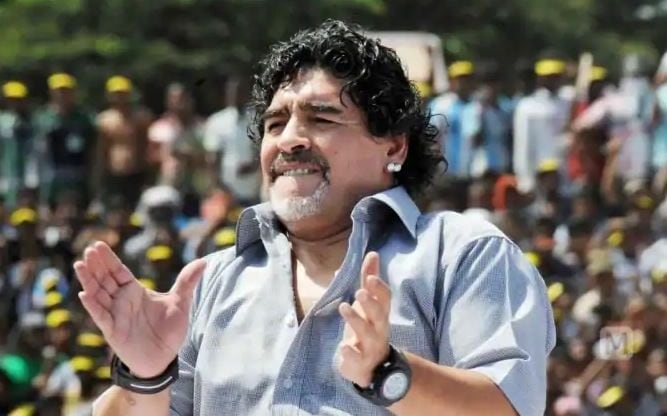 Thiruvananthapuram:The Kerala government has announced a two-day state mourning following the death of football legend Diego Armando Maradona. Kerala Sports Minister E.P.Jayarajan has announced that the mourning will be observed in the state starting Thursday.

Maradona died due to cardiorespiratory arrest at his home in the Tigre district on the northern outskirts of the capital Buenos Aires on Wednesday.

The football legend was no stranger to Kerala as in 2012, he had arrived on a two-day state visit to inaugurate a new showroom of a jewellery chain in Kannur.

Incidentally, the man who was instrumental in Maradona signing up as a brand ambassador of the jewellery group was Isham Hassan who has been left heartbroken following the demise of the legendary football.

Clutching an autographed football signed by Maradona, Hassan, while recalling his times with the Argentine, said that even the football appears to be sad and it does not have any air in it.

"I got this autographed football from him when we were in Malaysia when he came to inaugurate a new showroom of our group. This trip was three years back and we travelled sitting next to each other from Dubai to Malaysia and we stayed in the same hotel there," said Hassan.

"It was two years back that I met him last in the UAE. His manager was an Arab national and since I knew Arabic, we gelled well right from the time I met him first many years ago. The only barrier between he and myself was the language. Despite that handicap, we used to converse with the help of a translator. Later on, I used to interact with him with the help of his daughter who could speak English. The last I saw him was two years back in the UAE and after that, we had conversations over telephone," added Hassan, who is making every effort to travel to Argentina to take part in the funeral.

Charles Antony, a musician by profession, is another person who is grieving as it was he, who along with Maradona, sang a Spanish song when the latter was in Kannur.

Antony has composed a song in memory of the legend which starts "Adieus Diego Maradona," and he is now singing that for the TV channels in the state.