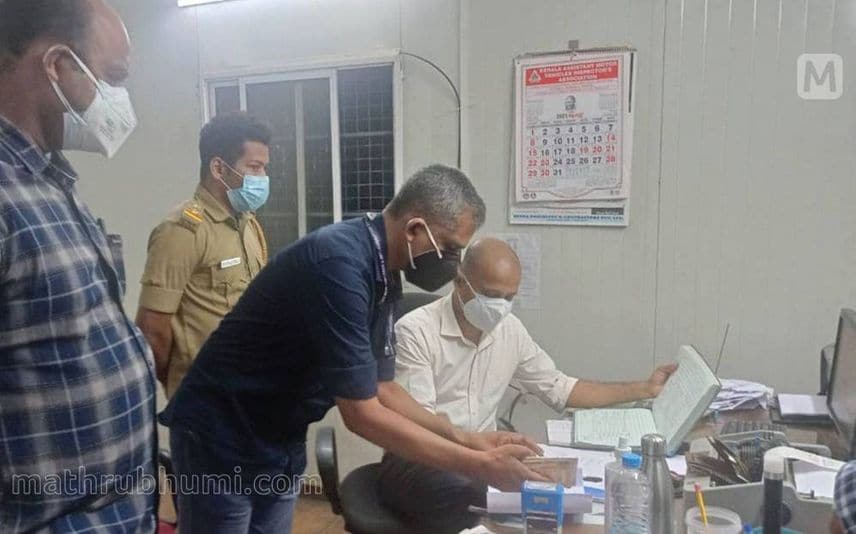 Kasaragod/Kannur: The Vigilance inspected the Motor Vehicle checkpost of Thalappady, Perla and Koottupuzha and seized unaccounted amount. Rs 16,900 was seized from Thalappady and Rs 750 from Perla. From Koottupuzha checkpost, the Vigilance held Rs 1600 within 5 hours of inspection.

The inspection took place on Friday at 6 am as a part of the state wide ‘Operation Bhrasht Nirmoolan’ of the Vigilance. Small vehicles are allowed to pass the checkposts without any checking if they give Rs 50 and the larger vehicles can pass by giving Rs 100. As the counters were enclosed, those give and receive the bribe could not see each other’s face. The drivers who gave money through the counters were unaware that the vigilance officers were sitting behind it and receiving the money.

A team led by DYSP Babu Peringeth reached Koottupuzha on Friday early morning. After a while, a message came to the WhatsApp of an officer stating that certain money had been remitted. When called to that number, he said that the amount for food was paid and promised to reach the checkpost by 10 am.

Though the Vigilance waited for him, nobody reached the checkpost. In a further probe, Vigilance found that the person whom they called was an agent working in the checkpost for the past 15 years and he regularly shifts the money collected by the officers from the checkpost. A detailed probe had been initiated to trace this person and his companion.

Hundreds of vehicles pass through the checkpost daily, but only 25 vehicles underwent weight check in the last month. Among them, only two were found with overload. The officers explained that the lack of weight measuring machines accounted for this and the vigilance had asked to install it.

CCTV cameras in the checkpost was not working. The notice board against bribery was placed in a way which does not come to the notice of the public. Vigilance captured all the evidence of mismanagements in the video. DYSP K V Venugopal informed that the report on the investigations at checkposts will be submitted to the Vigilance Director.