Last night around 10. 05 p.m., the first flight landed at Kochi from Abu Dhabi with 177 passengers. 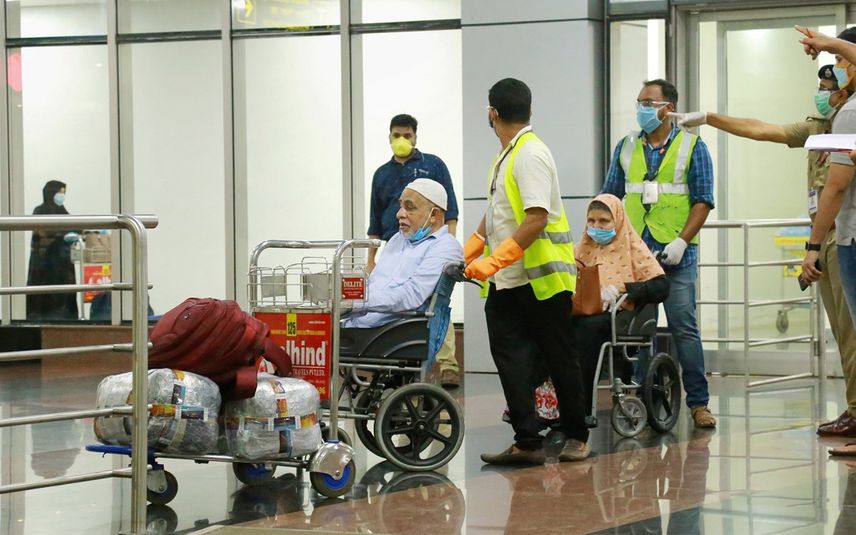 Indian nationals stranded in UAE due to COVID-19 pandemic, on their arrival at Calicut International Airport Kozhikode, in the wee hours of Friday. (PTI Photo)

"The secretary congratulated Kerala for its neat and clean handling of the two aircrafts. Everything went according to our plans and it has been appreciated also. I spoke to Air India CMD today and he said apart from the already announced two flights for the day, there might be another two more and it will be known during the day. Even though the schedules are there, there might be changes," said Jose.

According to the original plan of scheme, Friday, the first flight from Bahrain with 177 passengers will land at Kochi around 11.30 p.m. and another one will come from Riyadh in Saudi Arabia with 162 passengers to the Kozhikode airport at 8.30 p.m.

All these air evacuation is being done under India's "Vande Bharat Mission" and as announced these are 64 ferry services which will be operated from May 7-13 and is billed as one of the biggest air evacuation missions by any country.

Last night around 10. 05 p.m., the first flight landed at Kochi from Abu Dhabi with 177 passengers.

As per the accepted protocol all the pregnant ladies, four kids and those above 75 years were send to their homes for 14 day quarantine.

All the others have been quarantined in their home districts. They were taken in state transport buses in state run corona care centres and will be there for a week, after which all those who are negative will be asked to remain in isolation at their homes for another week.

Five of those who arrived after showing symptoms of fever were moved to the government hospital in Kochi and kept under close watch.

State Agriculture Minister V.S. Sunilkumar, who is overseeing the operations on Friday, told the media that this was done as a matter of abundant caution and all of them are fine, according to the latest medical reports.

The second flight that landed on Thursday was at Kozhikode and it came from Dubai with 182 passengers, including five kids. The same protocols are being followed across all the four airports.