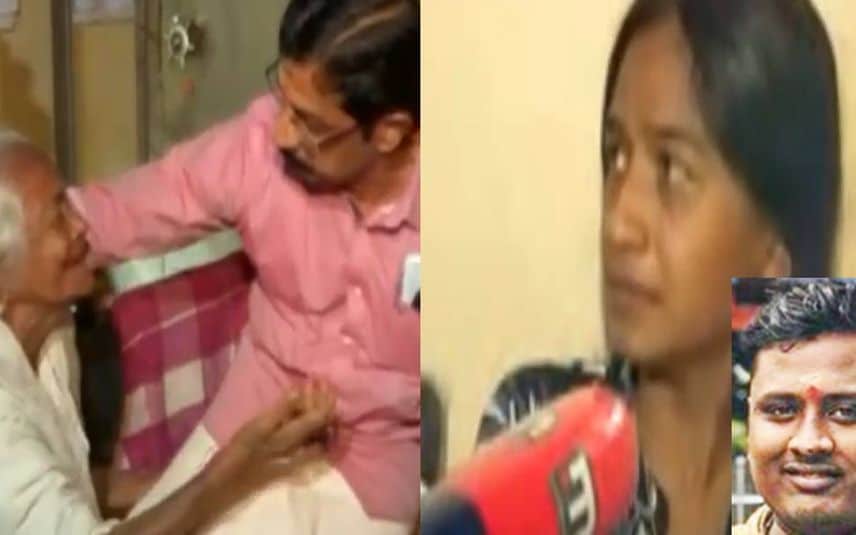 Palakkad: A day after the shocking murder of an RSS worker at Mambaram here, Arshika, the wife of the deceased while addressing the media claimed that she can recognise the assailants. According to Arshika, the assailants who killed her husband were wearing neither a mask nor any face cover. The crime happened when people were commuting on the road, she said. At that time even a school bus passed through the road, she added.

It was on Monday that the RSS worker named S Sanjith was brutally murdered in the broad daylight by a four-member gang. The person was waylaid and attacked when he was travelling with his wife on his motorbike. According to the onlookers, the gang followed him in a car and hit the vehicle on his motorbike.

As he toppled, the gang stabbed him, they said. Though he was rushed to a Palakkad district hospital, he succumbed. He reportedly had 15 stab wounds. The incident happened at a distance of 100 metres from Sanjith’s home. He was ‘Boudhik Pramukh’ of Elappully Zone.

Meanwhile, based on allegations of BJP leaders that the SDPI is behind the killing, their stronghold regions near Palakkad is under the scanner of the police. Kunnamkulam, Chavakkad, Ponnani and Cherai are the regions in which the police have intensified the hunt for the assailants who are on run. The chance of hideouts in these areas are not ruled out.

Preliminary findings of the police suggest that the assailants who came in a white Maruti 800 car for stabbing and hacking Sanjith, after the crime thereof escaped to Thrissur side. Police is of the assumption that the assailants will not have travelled longer distance. To clarify that, the CCTV visuals in Paliyekkara Toll Plaza in Thrissur will be examined.

Notably, state and district leaders of BJP while addressing maintained that they are not satisfied in the investigation of police. According to them, the police is not proactive. 24 hours have passed and the police have not nabbed the accused, they alleged and conveyed their protest over it.