As per the statistics at 4.30 pm, the highest polling was recorded in Alappuzha – 72.04 percent. 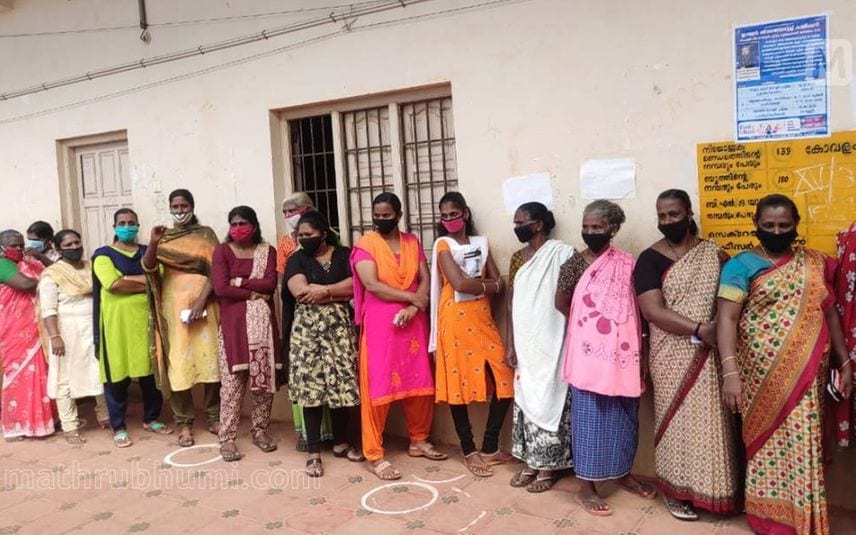 Thiruvananthapuram: Nearly 70 percent polling was recorded by 4.30 pm in the first phase of elections to the local bodies in five districts of Kerala on Tuesday. Amid fears in many quarters about the impact of Covid on voting percentage, large turnout was seen in almost all booths.

As per the statistics at 4.30 pm, Thiruvananthapuram recorded 64.85 percent while Kollam recorded 68.74 percent, Pathanamthitta recorded 66.43 percent, Idukki recorded 70.10 percent and the highest was recorded in Alappuzha – 72.04 percent.

Polling began for local bodies in Thiruvananthapuram, Kollam, Pathanamthitta, Alappuzha, and Idukki districts at 7 am to decide the fate of 24,584 candidates in fray. It will end at 6 pm.

With close to 60,000 active coronavirus cases in the state, the last hour of polling has been dedicated to Covid-19 patients who have been allowed to come in PPE kits to cast their votes. Even polling officials will wear PPE kits during this period.

Across the five districts, polling for panchayats, municipalities and corporations was brisk and long queues were seen. Technical glitches to voting machines disrupted polling in several areas.

"This includes 150 NRIs and 42,530 first-time voters. As many as 11,225 polling booths have been set up. Webcasting has also been introduced in 320 problematic polling booths. A total of 56,122 personnel have been deployed for election duty. Voting is from 7 am. to 6 pm," Election Commission had said.

The local body polls (Panchayats, Municipalities and Corporations) are being held under strict Covid-19 norms with voters being asked to sanitise their hands as they enter and exit the polling booths. To maintain social distance markers are used and face masks are mandatory. Only three voters are allowed inside the booth at a time.

Apart from postal ballots, Covid-19 patients are allowed to vote after regular voters cast their votes. Listed as special voters, they must arrive at the polling station before 6 pm. Polling officials and agents are instructed to wear a PPE kit before special voters can enter the polling station. All procedures applicable to ordinary voters for identification and application of ink are applicable to Special Voters. But they are asked to use the voting machine only by wearing gloves. The signature will be recorded in the voter register using a special pen.

Those treated at government-run hospitals will be taken to the polling station by the health department. Special voters living in non-government-controlled institutions or homes should come with a PPE kit at their own expense. Drivers carrying them must also wear a PPE kit, said the state election commission.

Across the state, in the 2015 local body polls, the Left won around 60 per cent of the total seats, followed by the Congress, while the BJP won a mere 1,200 seats out of around 21,000 seats in three tiers of local bodies.