We laughed at how media distort comments, says Tharoor after Satheesan, Sudhakaran call on him 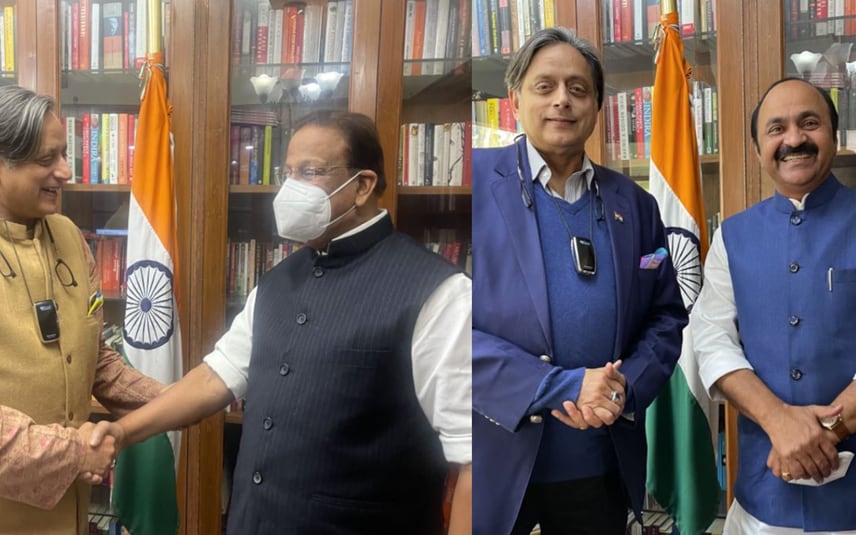 Thiruvananthapuram: KPCC president K Sudhakaran and Leader of Opposition VD Satheesan on Thursday met Shashi Tharoor MP at his office in New Delhi. The move comes in the backdrop of easing the tension between the state leaders and Tharoor over his stand in the K-Rail project.

Tharoor tweeted that the leaders called on him and discussed matters of importance.

"We discussed current political issues in the state & laughed about the media’s habit of distorting our remarks. Our focus is on strengthening the party for the fight ahead," he wrote after meeting K Sudhakaran.

"We enjoyed a long fifty-minute discussion on politics, development — and political developments! We see eye to eye on most things. Onward & forward!," he wrote after meeting VD Satheesan.

State Congress leadership had earlier openly criticized his statement that he need time to study the SilverLine project before taking a stand. Tharoor had also disagreed to sign the letter of the UDF MPs against the project. This irked the state leaders. However, Tharoor lately showed signs of coping with the state leadership by pitching 'alternative ideas' for the prestigious project of the state government. Though Sudhakaran had said that the party will seek an explanation from Tharoor, Satheesan recently had said that it never happened. The meeting of the leaders signifies ease of tension in the party.