Ernakulam District Collector S Suhas congratulated both Sonia and her husband Shijo, a nurse working in the state, on being blessed with the baby on Mothers' Day. 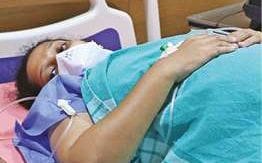 Kochi: It turned out to be a triple delight for a pregnant Kerala nurse as she returned home from Maldives on board an Indian Navy vessel along with over 600 others and within hours gave birth to a baby boy here on Sunday - Mother's Day.

The woman complained of uneasiness soon after her safe embarkation from "INS Jalashwa" ship that berthed at the Cochin Port at 9.30 am. She was immediately admitted to a government hospital for women and children at Mattancherry and later shifted to the private hospital at Kalamassery.

The couple had been married for six years and this is their first child. Sonia has been working as a nurse in Maldives for two years. She had several miscarriages earlier. Last time, she stayed at home in Kerala for five months and returned to Maldives after she became pregnant.

Sonia's huband Shijo, who is a nurse in Mysuru, was planning to resign his job and go to Maldives. By the time, the COVID lockdown was imposed and Sonia was stranded in Maldives.

Last time, the couple had decided to name their baby 'Rahel'. As they got a baby boy this time, they named him 'Paulo' which is the name of a saint. The couple opined that the baby was a blessing of the God for them.

Ernakulam District Collector S Suhas congratulated both Sonia and her husband Shijo, a nurse working in the state, on being blessed with the baby on Mother's Day.

The ship was the first to return from overseas as part of the Centre's Vande Bharat Mission to repatriate Indian citizens stranded in foreign countries due to the coronavirus lockdown and carried 698 people evacuated from Maldives. Of them, 19 were pregnant women and 14 children.

Man held for smoking inside lavatory of aircraft mid-flight