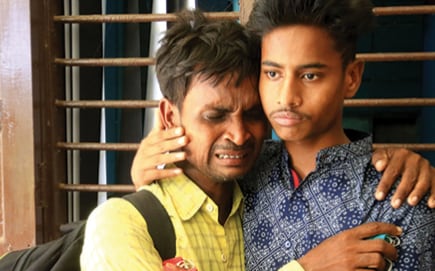 Vishnu Kumar Mandal along with his father Sunil Kumar

Thrissur: Vishnu Kumar Mandal, a deaf and mute boy from Bihar, who has been an inmate of Ramavarmapuram Children’s Home in Thrissur, has reunited with his family after two years. It is a film-like story with twists and turns, and has ended in a beautiful climax.

The boy was found in Thrissur railway station in December 2019 by childline activists and later taken to the children’s home. He was named Babu and has been receiving the love and care of staff there. Now, at the time of his parting only, the children’s home team came to know about his real name and native. However, for inmates and staff he is still their own Babu.

The reunion of Babu with his family has happened due to the efforts taken by children’s home superintendent, VA Nishamol, and children’s counselor Jithesh George. The pursuit of finding Babu’s family members was started when children’s home authorities decided to enroll him for school education. While applying for Aadhar for school admission it was found there is already an Aadhar that matches with his biometric details. An e-mail was sent to Unique Identification Authority of India following which the enrolment number of the existing Aadhar was received as a reply. However, phone number or pin code of the boy was not available. The child home authorities realised that they have hit a roadblock. However, Jithesh applied for the new plastic card copy of the existing Aadhar.

Along with that he gave his mobile number so that despatch progress to Babu’s original address can be tracked. The idea worked out and it was identified at the final phase of despatch that Babu’s house is under Raavuthura post office, a place in Bihar’s borders with Nepal.

After knowing about the post office, Child Home authorities approached police station and panchayat president of the region to find Babu’s home. Interestingly, present sub collector of Pathanamthitta Sandip Kumar IAS is a native of that place and his help turned crucial in reuniting Babu with his family. It was found that Babu’s original name is Vishnu Kumar and he hails from Bihar’s Katihar village.

Babu’s father Sunil Kumar reached Ramavarmapuram. They will be leaving for Bihar on September 24. According to Sunil, Babu left the place due to poverty. Though Sunil and family members filed a child missing case with police, the investigation did not yield results.

Meanwhile, Ramavarmapuram Children’s Home witnessed emotional outbreak of son and father. They called up his mother. Though Babu cannot talk, both mother and son communicated through emotions. Babu in the video call also showed scenes of Ramavarmapuram to her 4-year-old younger sister Srishti, elder brother of 22-year-old Rakesh and grandfather Bharath.

KTU rank holder loves antique clocks and fixes it too

Ambili irons out wrinkles in her life, earns doctorate