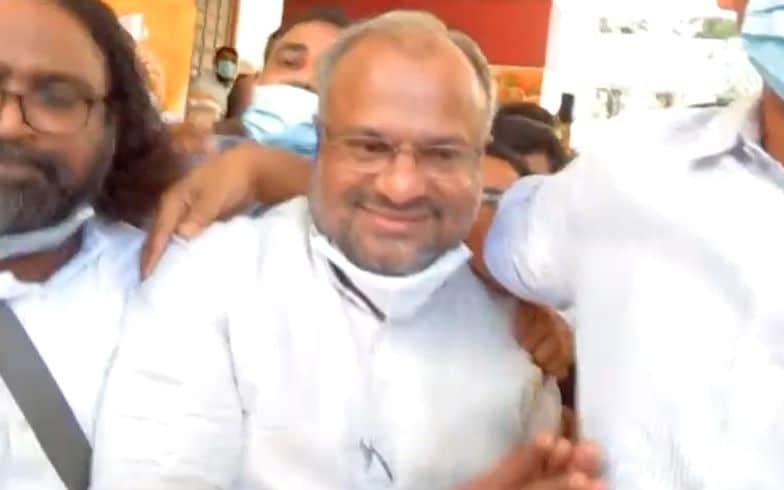 Kottayam: The district Additional Sessions Court acquitted Bishop Franco Mulakkal in the nun sexual abuse case. The verdict came after 105 days of trial and District court judge G Gopakumar said that Franco has been let free for want of evidence. Franco was acquitted of all 7 charges as the prosecution failed to produce evidence against the accused. Franco Mulakkal burst into tears upon hearing the verdict.

“Thanks to the almighty,” was the reaction of Bishop Franco Mulakkal after he came out of the court.

The court heard the statements of 39 witnesses in the case. All were loyal witnesses and did not turn hostile, said prosecution.

Bishop Franco was brought to the court by 9.30 in the morning. He arrived with his brother and brother-in-law and entered the court through the back door.

The court was surrounded by police personnel deployed under the guidance of Kottayam DySP. Bomb and dog squads inspected the courtroom. Barricades were positioned on the court’s compound.

The rape case against Franco was registered by police in Kottayam district in 2018 and he was arrested on September 21, 2018.

In her complaint to the police in June 2018, the nun, who belonged to the Missionaries of Jesus congregation, had alleged that she was subjected to sexual abuse by Franco, then Bishop of the Jalandhar diocese of Roman Catholic Church.

During his visits between 2014 and 2016 to Kerala, he was accused of raping the 43-year old nun on 13 occasions. Later, he was removed from the charge of the Jalandhar diocese.

The Special Investigation Team which probed the case arrested the Bishop and charged him with wrongful confinement, rape, unnatural sex and criminal intimidation.

He secured bail on October 16, 2018. The charge sheet names 83 witnesses, including the Cardinal of the Syro-Malabar Catholic Church, Mar George Alencherry, three bishops, 11 priests and 22 nuns. Of the 83 witnesses, 39 were called and they were heard.

Incidentally, Franco had approached the Kerala High Court and also the Supreme Court to quash the FIR against him, but both the courts refused to do so. The trial in the case had started in November 2019.

The court had restrained the print and electronic media from publishing any matter relating to the trial in the case without its permission.