The minister informed that necessary measures will be taken to arrange a job for Pradeep's wife Sreelakshmi in the Revenue Department in Thrissur district itself. 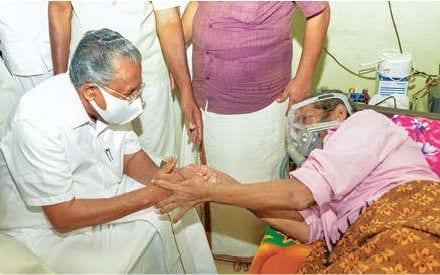 Thrissur: Chief Minister Pinarayi Vijayan on Thursday visited the house of Junior Warrant Officer Arakkal Pradeep, who died in the horrific helicopter crash at Coonoor in Tamil Nadu on December 8. He interacted with the deceased army officer's family members and consoled them. The Chief Minister arrived at Pradeep’s house by 7.30 pm on Thursday.

After placing flowers on Pradeep's photo that was kept outside his house, the CM entered the house. He sat beside Radhakrishnan, Pradeep's bedridden father and talked to him. Pradeep's wife Sreelakshmi, children Dakshindev and Devaprayaga, mother Padmini, Sreelakshmi's father Janardhanan, Pradeep's younger brother Prasad, Padmini's sister Saraswathi and Sreelakshmi's mother Ambika were also present there.

The CM enquired Minister K Rajan about the details regarding the job promised to Sreelakshmi.

The minister informed that necessary measures will be taken to appoint her to the Revenue Department in Thrissur district itself.