Kerala Chief Minister Pinarayi Vijayan took to Facebook to congragulate the young couple and said the state has always upheld and showcased such beautiful examples of religious harmony. 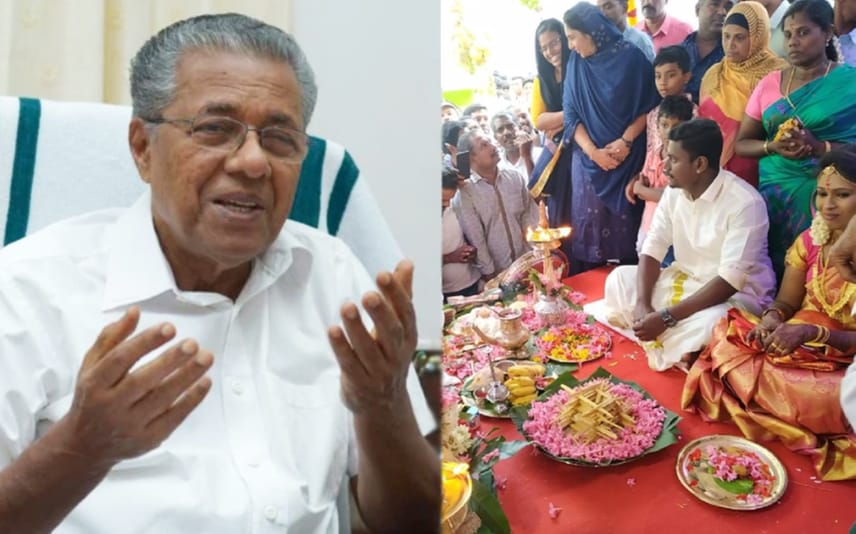 Alappuzha: In a rare wedding ceremony held in a Mosque, a Hindu couple tied the nuptial knot and exchanged vows here on Sunday.

The marriage hosted by the Cheruvally Muslim Jamaat mosque near here, was held according to hindu rituals in front of a lighted traditional lamp with guests from both the communities participating.

The Bride Anju and the groom Sarath exchanged garlands and performed rituals in the presence of a priest at the mosque premises, which was decked up for the rare occasion signifying communal amity. A vegetarian sadya was also held at the premises.

Kerala Chief Minister Pinarayi Vijayan took to Facebook to congragulate the young couple and said the state has always upheld and showcased such beautiful examples of religious harmony.

The wedding was held at a time when a concerted attempt was being made to divide people in the name of religion, Pinarayi Vijayan said conveying his wishes to the couple, their families and the mosque committee.

"Kerala is one and we will stay united" he said and shared a photograph of the wedding ceremony.

Since the bride hailed from a poor economic background, Anju's mother had sought help from the mosque committee to conduct the wedding, which they readily agreed.

The Mosque committee also gifted ten sovereigns of gold and Rs two lakh to the bride as a wedding gift. The marriage was held as per Hindu rituals.