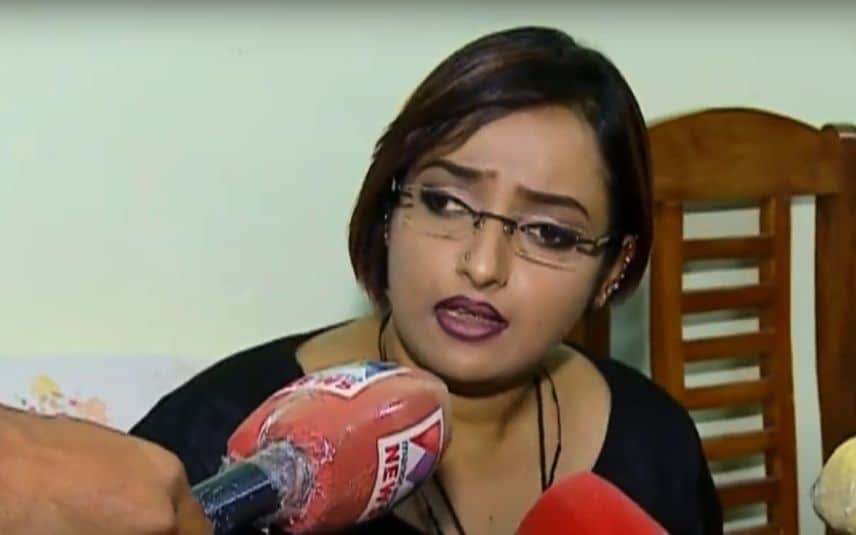 Thiruvananthapuram: Swapna Suresh, the key accused in the diplomatic baggage gold smuggling case has raised a sharp criticism against M Sivasankar IAS here on Friday. She alleged that he exploited her as a woman.

In an interview with the media, Swapna opened up that Sivasankar has been a part of her life for 3 years. She added that their relationship was not an official one.

Swapna came forward with the revelation after Sivasankar announced the launch of his autobiography ‘Aswathmavu Verumoru Aana’.

“ If I write an autobiography, I have to reveal a lot of matters related to Sivasankar. It will uncover many secrets related to him. Sivasankar just did a phone call to get me an appointment at the IT department. I didn’t attend any interviews to get the job. He is an important person in my life. How can he say that he doesn’t know about my appointment in the IT department,” asked Swapna.

At the same time, she also rubbished the allegations claiming she trapped Sivasankar by giving the iPhone.

“Unitac sponsored the iPhones. They directed to give one of these phones to Sivasankar. But he refused to accept it then. But I handed over that iPhone to him when he complained of some technical issues. Apart from the phone, I had presented many gifts to him on his birthday,” revealed Swapna.

"It is not expected from a senior IAS officer or a most experienced brilliant person and moreover such a loveable person who was a part of my life. I never expected him to say that I cheated him with an iPhone," she said.

Swapna also questioned Sivasankar's claim that he did not recommend her for the job in Space Park, saying the top bureaucrat recommended her and referred her for the job after seeing her "calibre, Middle East connections, working capacity and efficiency."

"I am already a victim. The whole world is saying that I am a dirty woman. I am a victim," Suresh said, narrating her version of the story to news channels.

"He was an important member of my family for three years. We, our family, were very open to him. He was the Point of Contact (PoC) for the UAE. So why should we misunderstand him? I don't have to cheat him by giving him an iPhone. I haven't read the book so I don't know the details," she said.

"I want to live, I want to bring up my children. They are powerful people, they have followers... As a woman, I was manipulated and exploited and destroyed. Sivasankar sir has a major role in it," she said.

Swapna said her life has become miserable as she has become jobless and "such books are affecting" her a lot.

"I have not troubled anyone, I did not cheat anyone but I was cheated, manipulated, exploited or I was used. That's the truth. I am just waiting. Let's see. If I cannot exist, suicide is the only option. I don't have any other option," she said.
Swapna said she is now being supported by her mother.

"I am trying hard. My mother supports me a lot. If I try to get a job somewhere, the public is against me. People don't trust me. Such books are affecting me a lot. Why am I being attacked? Sivasankar sir knows everything," she said.

Titled 'Ashwathamavu Verum Oru Aana' (Ashwathama is just an elephant), Sivasankar's book is published by noted publisher DC Books.Sivasankar has been keeping away from media glare even after he was re-inducted into the service on January 4 after a year-long suspension. The book is expected to hit the shelves on Saturday.

According to excerpts from the book, released by television channels, the senior bureaucrat who was arrested in the case in 2020 has rejected all the charges levelled against him by the central agencies.

Sivasankar, in the book, claimed that he had made no illegal intervention in the gold smuggling incident and never did any undue favours for Suresh.

He also alleged that he was targeted by the media over the incident.The officer, in the book, claimed that he was shell-shocked to know that Suresh, who was his close friend for three years, was a participant in smuggling.

Sivasankar, who was Chief Minister Pinarayi Vijayan's former principal secretary and also former IT Secretary, was suspended from service after his links with Suresh surfaced.

The gold smuggling case relates to the seizure of 30 kg of gold on July 5, 2020, from a diplomatic baggage at the air cargo of the Trivandrum International Airport by the Customs (Preventive) Commissionerate, Kochi. The consignment was found camouflaged in diplomatic baggage from the UAE that is exempted from inspection in accordance with the Vienna Convention.