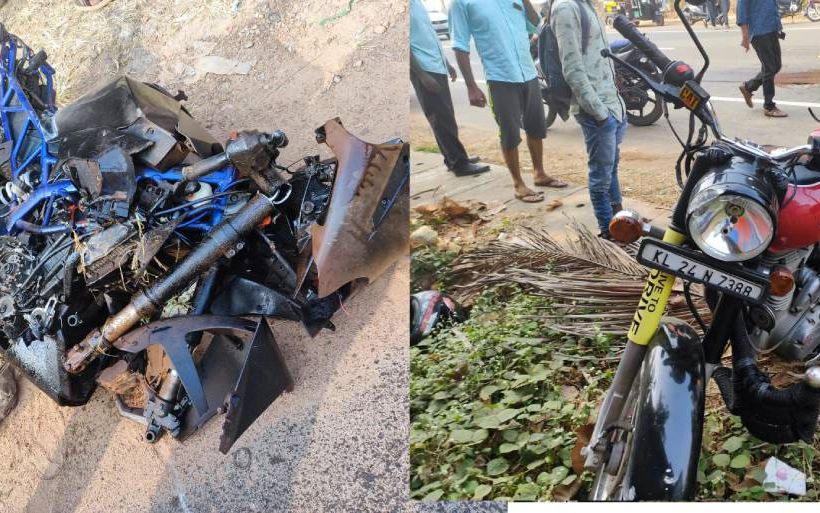 Kollam: A student suffered severe injuries after meeting with a road accident amidst a bike racing at Kottarakkara here on Friday. According to reports, the accident took place, when a member of the group who was engaged in bike racing tried to click a selfie while riding the bike. Aswanth Krishnan, an MBA student who was coming from the opposite direction suffered severe injuries in the accident.

The accident took place around 11.30 am on Friday at MC road in Polikode. A group of youth was engaged in bike racing on four bikes on the Thiruvananthapuram-Kottarakkara stretch. The person who was on the first bike tried to click a selfie for capturing all bikes in a frame. During this time, this bike rider lost his control and collided with the bike in which the MBA student was travelling.

It is learnt that the youth who tried to click the selfie had a narrow escape with minor injuries. But his bike was destroyed completely. Following the collision, the bike in which Aswanth was travelling hit on a car.
Interestingly, the four bikes engaged in the racing not carried any number plate.

According to reports, the other members of the gang managed to flee from the spot following the accident and also tried to hide their bikes. Police have seized one of these bikes.

Aswanth Krishna and the other man who created the accident are currently undergoing treatment at a hospital in Thiruvananthapuram.