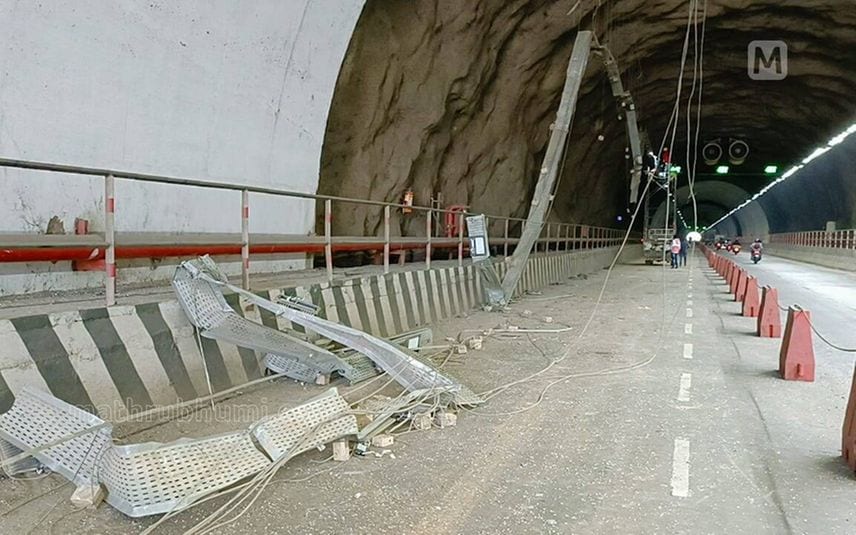 Thrissur: The lights and cameras installed inside the Kuthiran tunnel in Thrissur were destroyed after a tipper lorry with a lifted carriage tried to pass through the tunnel. It is learnt that 104 lights and panels, ten security cameras and dust detection sensors were destroyed at a stretch of 90 meters.

The incident took place on Thursday night in the first tunnel. The tipper lorry travelling from Palakkad had its rear lifted while passing through the tunnel at around 8.50 pm.

The damage is estimated to be around Rs 10 lakh. It is not clear whether the lights inside the tunnel were deliberately broken.

Though the CCTV footage of the incident was retrieved by the officials, the vehicle number is not clear.

In the CCTV footage, it is evident that the tipper lorry slowed down after learning that lights and cameras were destroyed. The driver was seen lowering the luggage carrying part and driving without stopping. Police have registered a case and started an investigation.

Though the lights and other facilities were destroyed, the traffic through the tunnel was not affected. With the opening of the second tunnel recently, the traffic congestion in the first tunnel has also been reduced. Though the authorities barricaded the area where the lights were broken, the vehicles are allowed to pass through this tunnel.

Tunneling through: The Kuthiran Story

One tunnel in Kuthiran opens for traffic