The letter also revealed that the VC, instead of convening a Syndicate meeting to decide on the matter, had merely "discussed" it with some Syndicate members and informed the Governor that the University Syndicate had turned down the proposal. 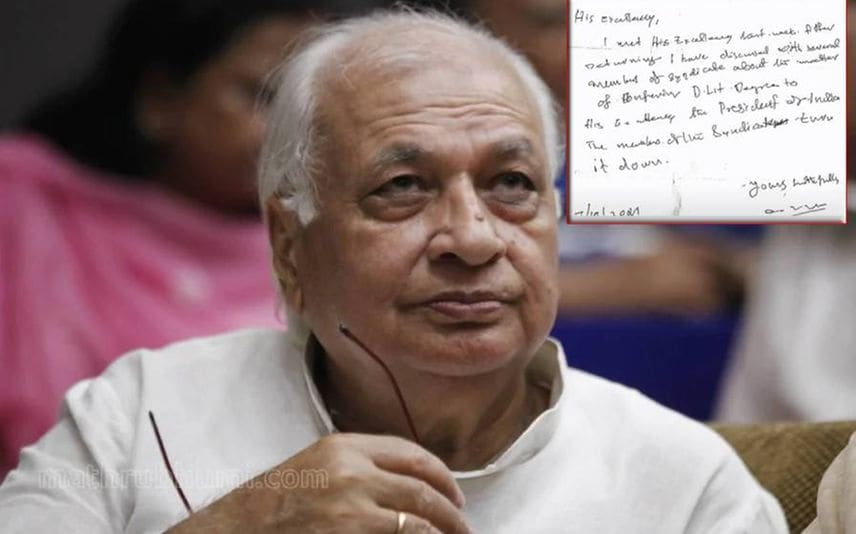 The letter also revealed that the VC, instead of convening a Syndicate meeting to decide on the matter, had merely "discussed" it with some Syndicate members and informed the Governor that the University Syndicate had turned down the proposal.

"... After returning, I have discussed with several members of Syndicate about the matter of conferring D.Litt Degree to his excellency the President of India. The members of the Syndicate turn (sic) it down," the handwritten letter dated December 7, 2021, read.

The Governor's office has confirmed the facts contained in the letter. The VC has not reacted to the entire episode since the row erupted last month.

The Governor had earlier expressed his wish to step down as the Chancellor of universities in the state from December 8 last year, alleging political interference in their functioning.

After the VC's letter -- which appeared to have been scribbled on a plain paper -- came to light, Leader of Opposition V D Satheesan alleged that the whole issue was the Vice-Chancellor's mistake.

"Now, it has emerged that the Governor had submitted a proposal to the VC. It seems like this was a mistake on the VC's part. Instead of placing the Governor's proposal before the University Syndicate, he personally spoke to a few members. That's not how it is done. Now, it is evident that the proposal was not placed before the Syndicate," Satheesan told the media.

A senior official of Kerala University, on condition of anonymity, told PTI that the VC should have presented the Governor's recommendation before a Syndicate meeting.

Meanwhile, the state unit of BJP alleged that the ruling and opposition parties were insulting the nation's constitutional bodies.

"Both the ruling Left and the Opposition Congress are insulting the constitutional bodies of the country. The VC has insulted the President of India by writing cheap letters," BJP state chief K Surendran told the media in Kochi, referring to the VC's letter.

The BJP leader also asked Satheesan to "stop batting for the Chief Minister". "He (Satheesan) is embarrassing himself by attacking the Governor," Surendran said.

Khan had earlier termed as "irresponsible" and "ignorant" the statements that he had recommended conferring of Kerala University's honourary DLitt on President Kovind.

Khan, who is at loggerheads with the state government over alleged political interference in the functioning of the universities, had said on December 30 that he was even ready to transfer the powers of chancellor to the Higher Education minister, who is also the pro-chancellor of the varsities.

Palakkad: The Southern Railways has notified that the Parasuram Express will partially conduct services from Sunday onwards. The service will be operated ..

Malappuram: Shihab from Chottoor near Valanchery here has a rare wish--to complete the hajj pilgrimage on foot. It may be noted that Mecca is almost 8,640 ..

Mukkam: Police arrested a Congress leader and others for cheating by way of mortgaging fake gold. Babu Pollikunnu, Congress Block Secretary and vice-president ..