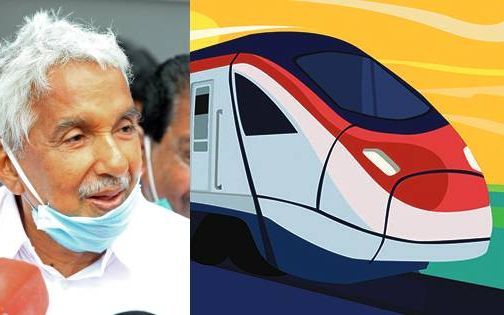 He informed that the UDF government under his leadership was forced to step back from the high-speed rail project after considering the huge financial liability and public outcry.

“During the reign of VS Achuthanandan government, a high-speed rail project similar to K-Rail was announced in the budget and DMRC was appointed as a consultant to execute the project. DMRC team submitted the project report when UDF came into power,” said Oommen Chandy while addressing the media here on Friday.

“UDF is opposing K-Rail after recommending alternate options. Only 300-acre land and Rs 10,000 cr will be needed to implement the suburban rail project launched by the UDF government,” he added.

“K-Rail will incur an expenditure of Rs 2 lakh cr and over 20000 people will be relocated for acquiring 1383 hectare land. The suburban rail project will be the best solution for all controversies surrounding the K-Rail project which poses economic and environmental destruction to Kerala,” said the former Kerala CM.

“ After dropping the high-speed rail project, the UDF government considered the suburban project. In the pilot phase of the project, the development of a railway lane till Chengannur was approved for an expenditure of Rs 1943 cr. Only 70-acre land was needed for it. The suburban train will take service through the lanes which are already constructed. If all approvals are cleared, the suburban project can be implemented within 3 years. Improvement of the present signal system and works like renovation of railway platform will be the major works under the project. With the implementation of the project, the speed of the trains will be increased and we will be able to operate over 20 MEMU trains every 20 minutes at the speed of 160 km. To implement the project on a stretch of 530 km, only a fund of Rs 10,000 cr was needed and 300-acre land was need to be acquired. UDF government had registered a company for the project after associating with the railway. But the project was cancelled in 2014 following the parliament elections,” he added.

Thiruvananthapuram: The accused in Vismaya dowry death case, Kiran Kumar, who was sentenced to 10 years of rigorous imprisonment, was shifted to Poojappura ..

Kannur: Kalliasseri native P K Suleikha's world stopped spinning when she was widowed seven years back. Years on, she has fought her way through all odds ..

Karipur: Police seized gold compound weighing 2.5 kilogram from outside the Kozhikode airport. The gold worth Rs 1.5 crore has been attempted to be smuggled ..