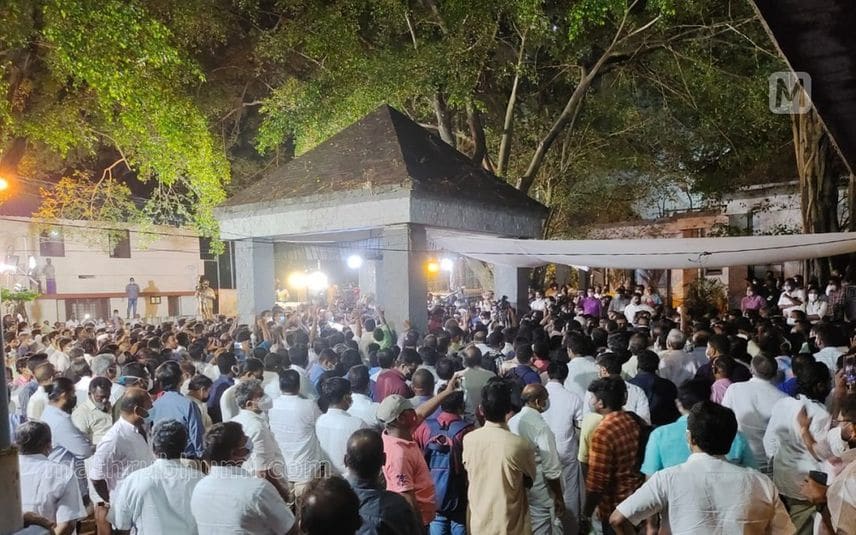 Kochi: Thousands of people gathered to bid farewell to late Congress MLA PT Thomas who was cremated with state honours at Ravipuram crematorium on Thursday. As per his wish, religious rituals were avoided and his favourite song ‘Chandrakalabham Charthiyurangum Theeram’ was played throughout the funeral ceremony.

Though the leaders informed that his last rites would be at 5 pm, the ceremony was delayed as a huge number of people thronged to pay homage to the MLA.

Huge number of people gathered at various locations in Idukki and Ernakulam districts as his body was brought by road from Vellore in Tamil Nadu, where he died on December 22 while undergoing treatment for cancer.

His funeral ceremony was held with full state honours including the guard of honour by Kerala police.

Thomas, who was elected as MLA from the Thrikkakara Assembly seat in April this year for the second consecutive term, represented Idukki in Lok Sabha during 2009-2014.

Working president of the Kerala Pradesh Congress Committee (KPCC) at the time of his demise, Thomas rose to the higher rungs of the party by sheer hard work, dedication and unflinching faith in the ideals of the organisation which he loyally served for over five decades.

Thomas was not a run-of-the-mill politician as he sincerely took up issues of larger concerns like protection of the Western Ghats.

Kochi: Aam Aadmi Party Kerala unit convener PC Cyriac stated that no special directions are needed for the people to vote for whom in the Thrikkakara byelection ..

Kozhikode: Days after recovering 266 bullets from an abandoned field near Thondayad, the police extended the probe into the incident to Karnataka. The ..