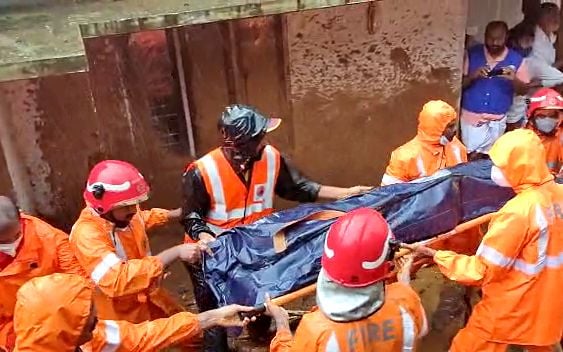 Thiruvananthapuram: More dead bodies were recovered from the landslide-hit places in Kottayam and Idukki. The rescue personnel have recovered 6 more bodies of people who went missing in the landslide at Kokkayar in Idukki. Bodies of 4 children, one woman and one man were recovered. With this, the number of people killed in rain-related incidents touched 23 in the state.

In Kottayam, 10 people including 6 members of a family were killed in the landslide at Koottickal. 3 bodies were recovered from the spot on Saturday and 7 on Sunday.

Meanwhile, the India Meteorological Department (IMD) predicted that the intense spell of rainfall activity over Kerala, Karnataka and Tamil Nadu and Puducherry is likely to reduce from today.

There would be a significant reduction in rainfall in Kerala today as compared to Saturday, said Indian Meteorological Department senior scientist Naresh Kumar on Sunday.

"There is going to be rainfall of a maximum of 6-7 cm today as compared to the 29 cm of rainfall recorded Saturday. And thereafter, there would be clear weather," Kumar said.

"Yesterday there was a low-pressure area over south-east Arabian sea adjoining Kerala. Today morning it is markedly less. It is weakened today. Because of its effect, yesterday there was extreme rainfall, more than 29 cm rainfall," said Kumar.

Earlier in the day, Kerala Chief Minister Pinarayi Vijayan urged people in the state to remain cautious and prepare themselves to move to a relief camp, higher ground or safer localities if requested by government officials. He also advised against inessential travel.

( with added inputs from ANI)