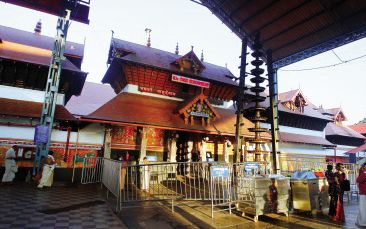 Kochi: The Kerala High Court has objected to the use of the term 'kodathi vilakku' (literally, court lamp) in connection with a religious event at the Guruvayur temple in Thrissur district, saying it gives an impression that courts were organising the same.

The High Court, in an official memorandum (OM) issued on November 1, has said that as secular democratic institutions under the Constitution, "courts cannot be seen engaging in activities that promote any particular religion".

The OM has been issued on the instruction of Justice A K Jayasankaran Nambiar, the judge-in-charge of Thrissur district.

The memorandum has said that it has been noticed by the High Court that an annual religious event called 'kodathi vilakku' was being hosted at the Guruvayur temple by an organising committee comprising members of the Chavakkad Munsiff Court Bar Association.

"While there can be no objection to the members of the Bar Association organising such events, either individually or collectively, the use of the name 'kodathi vilakku' is unacceptable for it gives the impression that the courts in our state are in some way connected with the organisation of the event," the memorandum has said.

It has also said that the fact that judicial officers of all ranks, including those professing other religions, "feel compelled/obliged to attend the annual event" which is also attended by the High Court judges, "indicates the extent to which the term 'kodathi vilakku' can be misleading".

"Accordingly, while steps are being explored to prevent the organisers of the event from using the name 'kodathi vilakku' in future, the judicial officers in Thrissur Judicial District are advised not to actively involve themselves in the organising of the said event, either by consenting to be a part of the organising committee or in any other manner. They shall also not feel compelled or obliged to attend the event," the High Court has said.