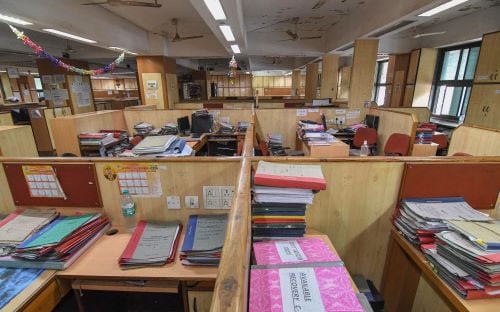 Kochi:The Kerala High Court on Monday directed the LDF government to forthwith issue orders prohibiting its employees from abstaining from work as part of the two-day nationwide strike.

Kerala state government officials remained idle as most of the employees did not turn up following the call of various trade unions for a national strike. Kerala came to a standstill on Monday morning.

The interim direction was issued by a bench of Chief Justice S Manikumar and Justice Shaji P Chaly on a PIL by one Chandra Chooden Nair S.

The order was confirmed by advocate Sajith Kumar V who appeared for the petitioner in the matter.

He said that the court was of the view that the strike by the government servants was illegal as the same is prohibited under their service rules.

The petitioner, in his plea, has contended that the state was encouraging its employees to go on strike against the central government by paying them salary for the days when they abstain from work.

The government employees were abstaining from work in support of the two-day nationwide strike -- on March 28 and 29 -- called by a joint forum of central trade unions.

The joint forum has given a call for a nationwide strike to protest against government policies affecting workers, farmers and people.