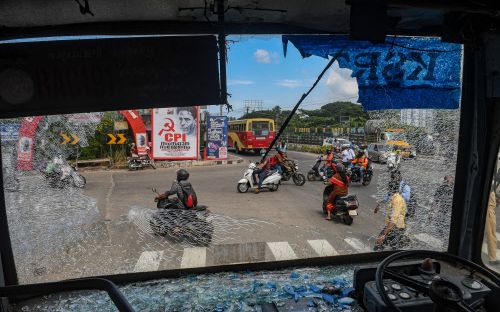 Broken windshield of a KSRTC bus after some miscreants threw stones on it, during the 'hartal' called by PFI on Sept 23, 2022 | Photo: PTI

Kochi: Kerala High Court on Monday asked the State government to inform it the total loss incurred in the hartal called for by the Popular Front of India (PFI) and subsequent violence.

A Bench of Justices A K Jayasankaran Nambiar and Mohammed Nias C P directed listing the loss incurred in each case registered related to the violence in the hartal on September 23.

Also, the court issued directions to submit an affidavit detailing attachment of the properties of the PFI and its former general secretary Abdul Sathar.

The government was also directed to submit the details of the bail applications filed in each court in connection with the violence.

The court posted the matter for further hearing on November 7.

So far, the police said they have registered a total of 361 cases and arrested 2,674 people for the violence on the day of the hartal.

Earlier, the court asked the banned outfit PFI and its ex-general secretary (Kerala) Sathar to deposit Rs 5.2 crore with the Home Department towards damages estimated by the bus corporation of the State and the government in connection with the hartal-related violence by saying they must be held accountable for it.

The order came on a plea moved by the Kerala State Road Transport Corporation seeking compensation of over Rs 5 crore from PFI and for damage caused to buses and cut in services during the hartal.

The government has told the Bench that private vehicles and private establishments also suffered a loss of Rs.12,31,800 due to the wrath of the sympathisers of the hartal.

KSRTC, in its plea, contended that the hartal was called without any advance notice which was a violation of the court order and that the violence on that day resulted in smashing of windscreens and damage to seats of 58 buses, injuries to 10 employees and one passenger.

Sathar, when he was the State general secretary of the outfit, had called for the hartal against the nationwide raids on PFI offices and arrests of its leaders, and then allegedly absconded.

Hours after the PFI was banned, he issued a statement saying the outfit has been disbanded in the wake of the Home Ministry's decision and subsequently, he was arrested.