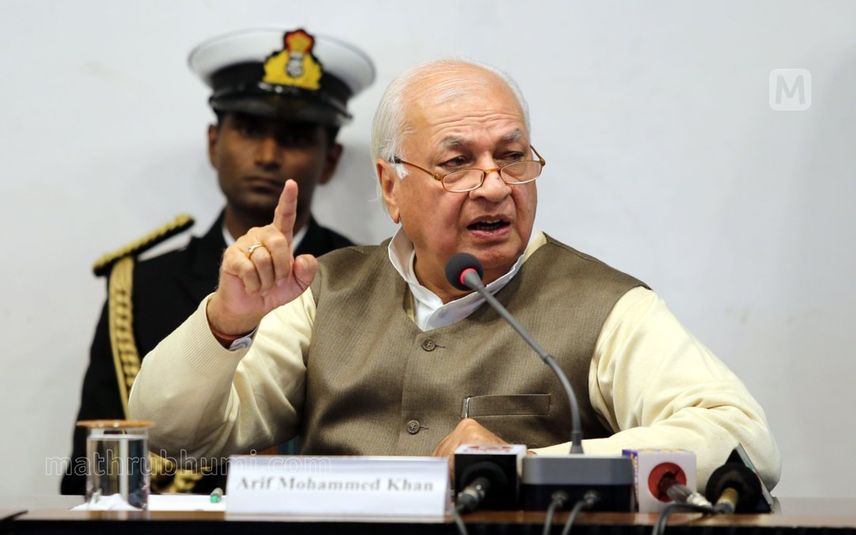 New Delhi: Strongly refuting allegations of politicising his constitutional position, Kerala Governor Arif Mohammed Khan has said he is ready to resign if there is even one instance of him appointing anybody belonging to organisations that are considered "troublesome politically" by the state government.

As the bitter battle between him and the ruling LDF continues in the state, mainly over the appointment of Vice Chancellors to the universities, Khan also asserted that his job is to see that the business of the government is transacted in accordance with the law.

In an interview with PTI here this week, Khan, who has been the state's Governor for three years now, rejected concerns that his position was being politicised.

"Where is the politicisation? I said that for the last three years, you have been saying that I have been implementing RSS agenda. Give me one name, just one instance where I have appointed anybody belonging to organisations whom you find troublesome politically, RSS, BJP... give one name whom using my authority, I have named anybody on anybody or university, I will resign.

"It can be politicisation... if one does such things. I have not done nor is there any pressure on me to do so," he said.

Amid the ongoing tussle between him and Chief Minister Pinarayi Vijayan-led government, Left parties on Tuesday conducted a protest march to the Raj Bhavan in the state capital Thiruvananthapuram.

CPI(M) General Secretary Sitaram Yechury had said that there is a situation where the office of the Governor is pitted against the state governments.

"This matter of controlling education is an important aspect of the BJP-RSS political design to convert this secular democratic India into a fascistic Hindutva Rashtra of their liking and for that, they require to control education and the consciousness of our youth," Yechury had said.

In response to a question on his announcement last month that Finance Minister K N Balagopal "has ceased to enjoy my pleasure", the Governor during the interview said the minister tried to stoke the "fire of provincialism" with his comments.

Khan, in an unprecedented action that attracted strong criticism from the state's ruling as well as Opposition parties, had said that a minister who deliberately violates the oath and undermines the unity and integrity of India "cannot continue to enjoy my pleasure". He had also sought "constitutionally appropriate" action against Balagopal and the demand was firmly turned down by the chief minister.

Elaborating on the issue during the interview, the Governor said that he had not withdrawn the pleasure just because the minister said something against him.

He also noted that if somebody from Kerala tries to stoke the fires of provincialism, "how it will affect the Keralites working outside the state?".

About the minister still continuing in the position, the Governor said, "I do not have the power to remove him because it is the choice of the Chief Minister but I will at least let the people of Kerala know. This much I should do in order to discharge my duty, oath which I have taken to serve the interests of the people of Kerala".

In connection with the earlier episode of re-appointing the Kannur University Vice Chancellor which was cleared by him, the Governor said that he had admitted that he was wrong.