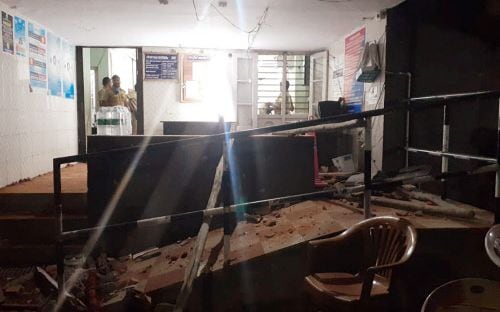 An inside view of the vandalized Vizhinjam police station after an attack, in Thiruvananthapuram on Sunday | Photo: ANI

Thiruvananthapuram/Kozhikode: The attack on a police station in Vizhinjam area by a large mob, allegedly of those protesting against the Adani port construction, was termed as "unacceptable" by the Left government on Monday, while the Latin Catholic church claimed "outside forces" were behind it and sought a judicial probe into it.

The ruling CPI(M) said the recent incidents of violence in the coastal area were reprehensible and claimed that some "mysterious forces" with vested interests were trying to create a riot-like situation there.

"In the name of protests, some were resorting to violence to create a conflict in the coastal areas and the state government should take strict action against the same," the CPI(M) state secretariat said in a release.

The Congress-led UDF opposition, on the other hand, blamed the government for "deliberately provoking" the protesters to take up violence by lodging an FIR against at least 15 Latin Catholic priests, including metropolitan Archbishop Thomas J Netto and Vicar General Eugene Pereira, over the violence at Vizhinjam on Saturday.

"If protest leaders (priests) were to be made accountable for actions of the protesters, then would Kerala Chief Minister Pinarayi Vijayan and CPI(M) state secretary M V Govindan be held responsible for protests and other actions of their party workers?" Leader of Opposition in the state assembly V D Satheesan asked while speaking to reporters in Thiruvananthapuram.

The Congress leader advised Vijayan to set aside his ego and directly hold discussions with the protesting fisherfolk to convince them to end the agitation.

Earlier in the day, Kerala Minister of Ports Ahammed Devarkovil said the government has been "very patient" till now in relation to the protests, but if the agitation attains a "criminal nature" -- where police personnel are attacked and injured and police property is destroyed -- that was "unacceptable."

"Especially in a secular state like Kerala, we will not allow any kind of communal conflict," the minister said and claimed that the mob attacked houses and establishments of those not belonging to their community.

"We will go to any extent to ensure communal harmony in the state," the minister said while speaking to reporters in Kozhikode.

On being told that the Latin Catholic church, which is leading the protest against the port construction, has claimed that external forces were in play and were the reasons for the violence during the last two days, Devarkovil said the government has received several reports and the same were being investigated.

Vicar General Pereira, who has been seen at the forefront of the protests, claimed "outside forces" were behind the port-related violence in the last two days and said there should be a judicial probe into the incidents.

At the same time, he also said the attack on the police station, injuries caused to the police personnel and the damage to property were not justifiable.

State Finance Minister K N Balagopal said these unfortunate incidents of violence were happening when the project, an important one for the state, was at the finishing point and hoped that the matter can be resolved amicably.

Devarkovil too said that the project, which cost around Rs 7,500 crore, was important for the overall development of the state and therefore, its work cannot be stopped -- which is one of the seven demands of the anti-port protesters.

He said five demands have been accepted and besides the stopping of the port construction, the only other demand that remained was providing kerosene at subsidised rates to fisherfolk.

The minister said kerosene was provided by the Centre and therefore, it was not up to the state to provide it at subsidised rates.

He also said that when the protesters were not abiding by repeated orders of the high court not to obstruct construction work or movement of materials for the project, it makes no sense for them to seek a judicial enquiry into the violence.

"So if there is an action, there will be a reaction," he said, but added that till date the government has not tried to suppress the protest by force in view of its public nature and presence of women and children at its forefront.

"However, we will have to implement court orders," Devarkovil further said.

Satheesan said that while the Congress and UDF opposition led by it would never encourage the violence that occurred in Vizhinjam on Sunday, it had given several warnings to the state government that if they do not resolve the issue, the situation could turn dangerous.

He also alleged that the CPI(M) and the BJP were working together to derail the protest.

Senior Congress leader and former KPCC president V M Sudheeran said the agitators were seeking a proper study of the impact and consequences of the project on the coastal regions, but it has been "twisted into an anti-port agitation."

The CPI(M), while blaming some vested interests for the violence at Vizhinjam, said that the state government has always worked to safeguard interests of the fisherfolk and would continue to do so.

Kerala Assembly Speaker A N Shamseer urged the protesters to withdraw their agitation and to cooperate with the state government as most of their demands were accepted.

Meanwhile, the Kerala Catholic Bishops' Council (KCBC) termed the Sunday violence as unfortunate, but said that the Centre and the state government were ignoring the protesters' demand for a proper study of the impact of the port construction.

They also opposed the police action of registering FIRs against the priests and sought an impartial and fair investigation into the violence at Vizhinjam.

Over 3,000 'identifiable persons' have been booked in connection with clashes during an ongoing protest against the Adani port project in Kerala's Vizhinjam area on Sunday night.

As many as 36 police personnel were reported to be injured in the violence that ensued.