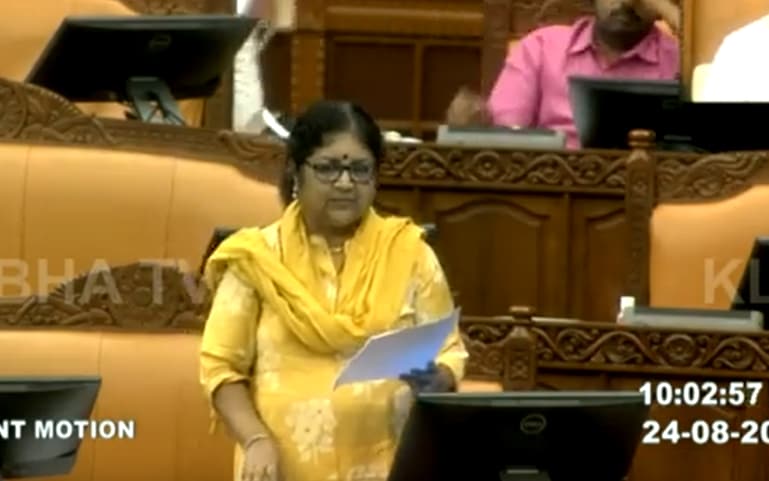 Thiruvananthapuram: The Kerala government on Wednesday defended in the state assembly the Kannur University's move to appoint Priya Varghese, wife of former Rajya Sabha MP K K Ragesh, as Malayalam Associate Professor in the varsity, even as the Congress-led UDF opposition claimed that VCs of universities are puppets of the ruling Left dispensation.

State Higher Education Minister R Bindu said in the House that only those candidates who satisfied the minimum academic score and specified basic qualifications laid down in UGC regulations were invited for an interview by Kannur University.

Thereafter, a selection committee constituted in accordance with University Grants Commission (UGC) had interviewed them and therefore, there was nothing irregular about the appointment process, the minister claimed.

She was responding to the opposition's motion for adjournment of the House to discuss the alleged illegal and back-door appointments of relatives of CPI(M) leaders in universities in the state.

Bindu rejected the opposition charges regarding illegal appointments as well as claims that the higher education sector in the state was in a dangerous situation.

The opposition, on the other hand, alleged that many of the candidates including Varghese were not qualified for the posts and were being appointed or selected due to political interference.

In view of the submissions of Bindu denying the allegations, Speaker M B Rajesh ruled that the motion for adjournment moved by the opposition stood rejected.

Subsequently, Leader of Opposition (LoP) in the state assembly V D Satheesan, in his speech before leading a walkout, alleged that in order to facilitate such illegal appointments, the state was appointing Vice Chancellors, who are their puppets.

In this manner, the universities in the state have been 'politicised' to a large extent, he said.

Kerala Chief Minister Pinarayi Vijayan questioned the LoP over his claim that the VCs were 'government puppets' by pointing out that the Vice Chancellors of Kerala, Mahatma Gandhi, Calicut, Cochin and Kannur universities were all well qualified academicians.

Responding to the CM's remarks, Satheesan said he called the VCs as puppets as they were appointing people to teaching positions in violation of UGC regulations.

The LoP said that if eligible candidates are sidelined in favour of those with political connections, it could lead to unrest among the youth and disappoint the thousands of qualified persons looking for jobs.

He further said that since the state Higher Education Minister has not answered the queries raised by them, the opposition was staging a walkout from the House.

The Kerala High Court on August 22 stayed the controversial appointment of Varghese as Malayalam associate professor in Kannur University.