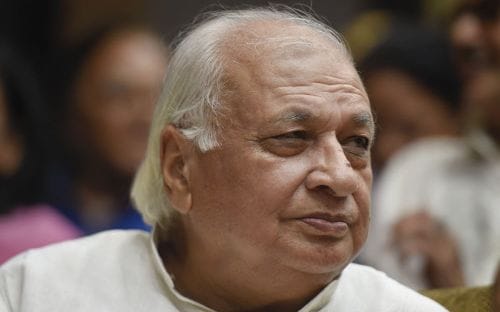 The issue was resolved after the government, yielding to the Governor's pressure, replaced K R Jyothilal as principal secretary, General Administration Department (GAD) with a senior civil servant.

It was Jyothilal who had written the letter on behalf of the government to the Raj Bhavan a few days ago citing the violation of prevailing conventions in the appointment of former BJP leader Hari S Kartha as Additional Personal Assistant to the Governor.

"Yes, the Governor has signed it," a relieved state minister for Local Self Government, M V Govindan, told reporters here after the hours-long crisis that gripped the state administration on the eve of the budget session of the Assembly.

Sources said the Governor signed the document after receiving information from the government that senior IAS officer Jyothilal was replaced by top bureaucrat Sarada Muraleedharan as the principal secretary GAD.

The one-month-long budget session of the Kerala Assembly will commence here on Friday with the customary policy address of the Governor.

It is observed that the row over appointment of governor's additional PA resulted in the incident.The government had expressed displeasure over the appointment of BJP leader Hari S Kartha as additional PA to the Kerala governor. Though the government approved the governor’s proposal for the same, it expressed dissastisfaction. Public administration secretary KR Jyothi Lal also sent a letter to Raj Bhavan informing government’s displeasure on the matter. It is learnt that this move irked the governor to take a stubborn move over the policy address.

The government was busy with efforts for settling the issue as the policy address in the budget session was scheduled for Friday. Chief Minister arrived at the AKG centre and discussed the matter with senior leaders to find a solution for the issue.

Following this move, the CM phoned the governor and informed that the government will discuss his opinion on pension for ministers’ personal staff.With the removal of Jyothilal from the post, the governor agreed to approve the policy address. Around 6.32 pm on Thursday, he signed on the document.

Chief Minsiter Pinarayi Vijayan visited the governor at Raj Bhavan here on Thursday and handed over the policy address. During this meeting, the governor refused to approve it.

As per the house procedure, cabinet approved policy address will be handed over to the governor and he will deliver it in the assembly. But as the governor has put forward some conditions for approving the policy address, all eyes were on the government’s response.

A few days back, in an interview with Mathrubhumi News, the governor expressed his disapproval on the government’s decision to give pension to the personal staff of ministers.