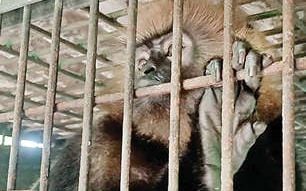 Nilgiri Langur inside a cage of Rapid Response Team

Nilambur: Kerala forest department officials released a Nilgiri Langur into the forest region of Tamil Nadu. The langur, which was called ‘Beeran’ was kept in a cage at the office of Rapid Response Team in Nilambur for over a month, citing the ruckus it created in the residential area of the locality.

The Rapid Response Team had captured the langur when it became a constant troublemaker in the agriculture land adjacent to Padukka forest area. Though it was released at Nadukani ghat, the langur soon reached Vazhikkadavu- Vellakkatta region and continued unleashing trouble in the region. Soon it was caught and let free again in the Thottapally region in Chaliyar panchayat.

The order to release the langur in Tamil Nadu came up at a time it was living in accord with the officials of forest department in Nilambur.