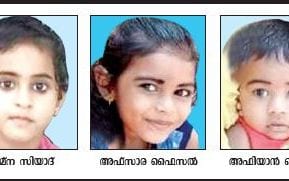 Kokkayar: During the rescue operation in Kokkayar where a landslide occurred, the volunteers happened to see a heart-wrenching sight. The bodies of three children were lying cuddled in the mud. The deceased were identified as Afsara (8), Amna (7) and Afiyan (4). Their bodies were found on Sunday around 3 pm. Along with them, another child named Ameen died in the landslide.

Fousiya and children reached her house at Kakkayar from her husband's house at Kanjirappally to attend a wedding ceremony. Her father Nazeer and mother Ramla had gone to hospital at Mundakkayam on Saturday. As the roads were blocked by flood, they could not return home.

Though Fousiya’s brother Faizal had also gone out, his children were at home. The children were playing while the landslide struck on Saturday evening.

The family was planning to go to attend the wedding after Nazeer and Ramla returned from hospital. But when they came back, they could only see a heap of mud at the place of the house.