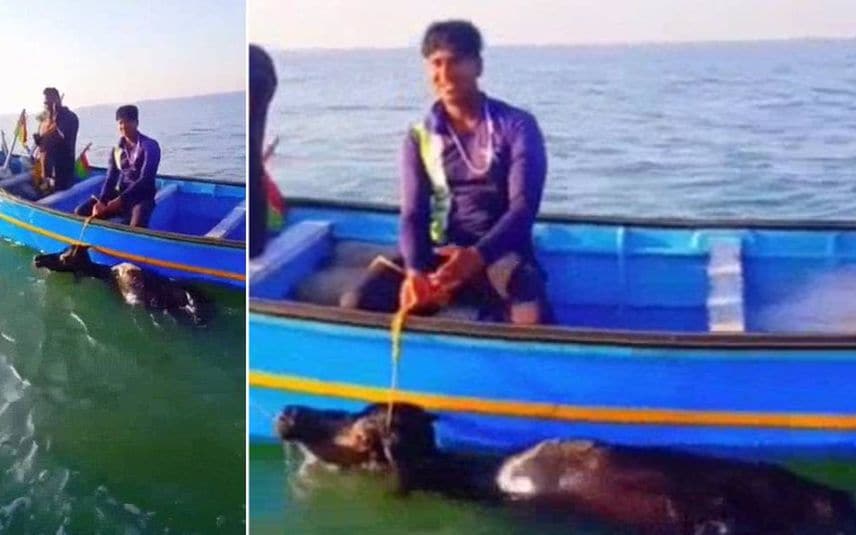 Fishermen travelling along with buffalo

Kozhikode: A group of fishermen from Kozhikode’s Kallayi let off their one day’s catch to rescue a buffalo from drowning in the sea. The members have been identified as AT Firoz, AT Sakeer, TP Puvad, Muhammad Rafi and Dilshad.

The fishermen namely AT Firoz, AT Sakeer and TP Puvad in the boat named Arafa Shadha were on their way for fishing on Wednesday midnight. They heard a strange and ominous sound after covering a stretch of 2 km.

Though they panicked initially, they spotted a drowning buffalo in the torchlight. Simultaneously, they tried to rescue the buffalo. However, out of fear, the buffalo was moving away from them and they were not able to lift it to the boat. Later, another gang of fishermen Muhammad Rafi and Dilshad joined the mission.

The fishermen struggled for hours to rescue the buffalo. Notably, Rafi jumped into the water and tried to have a hold on buffalo’s rope. The attempt was successful and he navigated it to the boat. Out of fear buffalo kicked them with its feet but the fishermen were able to keep buffalo adjacent to the boat. They moved slowly towards the shore as increasing speed submerged the buffalo.

The fishermen and buffalo reached the shore by Thursday 8 AM and they handed over it to its owner. Talking to Mathrubhumi. Com, Firoz, one among the fishermen said that though they lost one day’s earning, they were able to rescue a life.