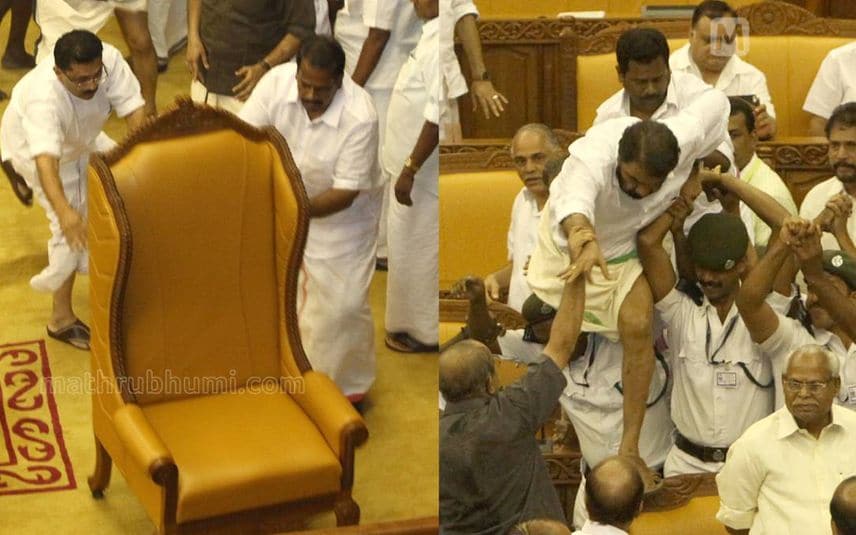 Thiruvananthapuram: A court in Kerala on Wednesday framed charges against General Education Minister V Sivankutty and some other prominent LDF leaders in the 2015 Assembly ruckus case.

The charges were read out by the court of Chief Judicial Magistrate (CJM) here to Sivankutty, Left MLA K T Jaleel and former MLAs K Ajith, C K Sadasivan and K Kunhammed who denied the same, a lawyer associated with the case said.

Thereafter, the court listed the matter on September 26 for reading out the charges to accused E P Jayarajan who was not present before it, advocate Mridul Mathew said.

All the six accused are facing charges under sections 447 (criminal trespass), 427 (mischief causing damage), read with section 34 of the Indian Penal Code (IPC) and Sec 3(1) of the Prevention of Damage to Public Property (PDPP) Act.

Advocate Mathew represented senior Congress leader Ramesh Chennithala, who has been opposing the Left Front leaders' attempts to get discharged from the case.

Once the charges are read out to Jayarajan, who is also the LDF convenor, the witnesses in the case would be summoned, the lawyer said.

The accused, except Jayarajan, appeared before the magisterial court after the Kerala High Court earlier this month declined to stay trial in the case and directed them to be present before the trial court on September 14.

The high court's order came on a criminal revision petition moved by the accused last year against the dismissal of their discharge plea by a lower court in Thiruvananthapuram.

The high court had also said that it will hear their revision petition on September 26.

The accused have claimed before the high court that the findings against them are not supported by any legal evidence, none of the then MLAs filed any complaint regarding the incident and the probe was conducted by a CB-CID DySP based on a letter from the Legislative secretary.

On October 13, last year, the CJM court dismissed the discharge pleas of the accused, saying the material before it discloses a grave suspicion that they have committed the offences and therefore, there were sufficient circumstances to frame charges against them.

The Assembly had witnessed unprecedented scenes on March 13, 2015 as the LDF members, then in the opposition, tried to prevent Finance Minister K M Mani, who was facing charges in the bar bribery scam, from presenting the state budget.

Besides flinging the Speaker's chair from the podium, electronic equipment like computers, keyboards and mikes on the desk of the presiding officer were also allegedly damaged by the then LDF members, causing a loss of Rs 2.20 lakh.