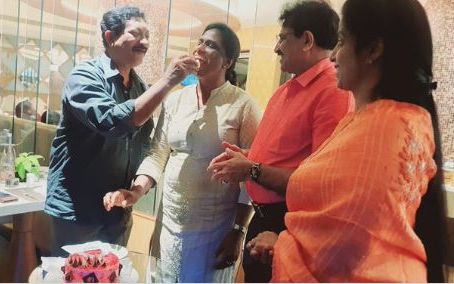 Elated over being nominated to the Rajya Sabha by the Centre, sprint legend P T Usha on Thursday thanked her supporters and well-wishers across the country and said their faith in her would go a long way in shaping her journey forward.

"Elated by the wonderful wishes from all over India! Your support and faith in me will go a long way in shaping my journey forward from here. Ek Bharat Shrestha Bharat," Usha tweeted.

She also shared a photo of her cutting and sharing a cake with her husband and some others to mark the occasion.

Soon after the announcement came last night, she, through her Twitter handle, also expressed her gratitude to Prime Minister Narendra Modi and said she was "deeply touched" by his "kind words" about her.

"I will always give my best to any responsibility bestowed on me, and work towards the betterment of all of us Indians. Jai Hind," she tweeted on Wednesday.

Meanwhile, wishes poured in from various quarters congratulating the legendary athlete on her new achievement.

Wishing her all the best, Kerala Chief Minister Pinarayi Vijayan said her term as a Rajya Sabha member would be beneficial for sports and would help to strengthen the secular democracy.

"Hearty congratulations to @PTUshaOfficial on being nominated to the Rajya Sabha. As an illustrious athlete and inspiring mentor you have done Kerala and India proud. Hope your term will be beneficial for our sports and will help to strengthen our secular democracy," he tweeted.

"Congratulations to Our beloved P T Usha for being nominated to Rajya Sabha," Mammootty tweeted.

In her tweet, Mohanlal described Usha as the "queen of track and field."

The Centre on Wednesday nominated four noted personalities, including celebrated athlete P T Usha and music maestro Ilaiyaraaja, from as many southern states to the Rajya Sabha, in what is being seen as the ruling BJP's big outreach to recognise prominent figures from south India.

Prime Minister Narendra Modi congratulated all four and cited their contributions in their respective fields.

"The remarkable PT Usha Ji is an inspiration for every Indian. Her accomplishments in sports are widely known but equally commendable is her work to mentor budding athletes over the last several years. Congratulations to her on being nominated to the Rajya Sabha," Modi tweeted.

Popularly known as the Payyoli Express, Usha has won medals for the country in various international sporting events, including the Asian Games, the Asian Championships and the World Junior Invitational Meet. She has set and broken many national and Asian records during her career. PTI