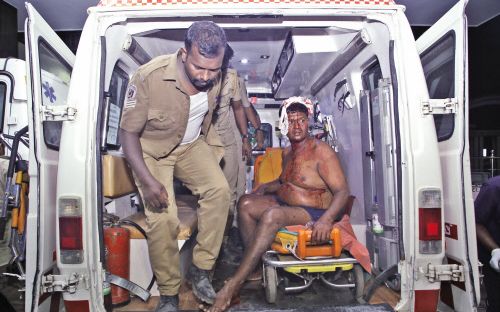 Kochi: Kerala Catholic Bishops' Council (KCBC) on Monday demanded an impartial and fair investigation into the violence which erupted yesterday at Vizhinjam as part of the protest against the Adani port.

"The survival protest of fishermen at the Vizhinjam port gate has been going on for more than 130 days. It is unfortunate that yesterday's untoward incidents took place in this protest, which is being led by the Archdiocese of Thiruvananthapuram," said KCBC.

The Council said the attitude of the central government and the state government which ignores the demands of studying the basic problems arising due to the construction of Vizhinjam port and finding solutions to them cannot be justified.

It further said the action of the police, who filed a case against the archdiocese head Archbishop Thomas Neto, the assistant bishop R Christudas and the priests along with the leaders of the protest committee who are leading the protest, is objectionable. This protest for fair rights should have been prevented from becoming violent.

"It is inappropriate and ill-intentioned for political leadership and administrations to make statements that exacerbate the problem. It is requested that those responsible should respond appropriately to resolve the issue. KCBC demands that an impartial and fair investigation should be conducted into the incidents that took place yesterday and that the government should take immediate steps to resolve this protest as soon as possible before it worsens," added the Council.