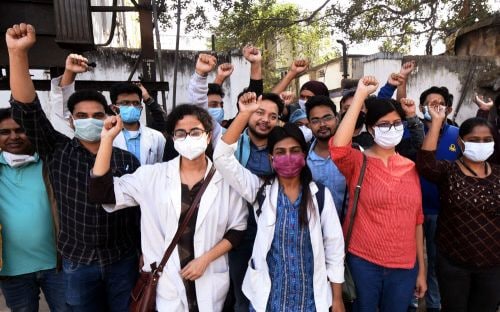 PG doctors across the country have expressed their anger at the delay in NEET-PG admissions. A scene from Patna Medical College & Hospital | Photo: ANI

Thiruvananthapuram: As the Kerala government has issued an order to appoint Resident Doctors in medical colleges in the state, the post-graduate medical students may withdraw the strike on Friday. Earlier, Health Minister Veena George had warned the doctors to call off their protest to avoid tough action. They have announced to boycott emergency services from Friday.

The appointment of the 373 temporary non-academic junior residents comes in the backdrop of the delay in the NEET PG allotment. The creamy layer for the EWS quota was challenged in the Supreme Court. The NEET counselling will not be held till the court pronounces a verdict. The resident doctors will be paid Rs 45,000 per month.

George said a protest at the time when the Covid pandemic is continuing to cause havoc, will throw the health system out of order.

The protest was announced due to the delay in issuing the order. The decision was made earlier in the meeting with the doctors' representatives and the minister. However, the representatives said they will only withdraw the protest after reviewing the order. Their second major demand was to speed up the NEET counselling. However, the government told them that the matter is sub judice.

"We have held two rounds of talks with the PG medical students. One of their demands is that the admissions to the first year PG courses should be completed early. In this issue the state government is helpless as it is before the apex court," Veena said.

But the protesting doctors spoke equally tough and said they have been airing their grievances for a long time but things have not moved as the government is doing nothing.

"We have been working nonstop in the past 18 months... at the moment there is a shortage of around 700 doctors and despite assurances, no appointments are being made. Moreover, we have been demanding a pay hike for a long and nothing has happened on that front too, and hence we have no other option but to step up our protests," said a protesting doctor.

Meanwhile, PG doctors across the country have expressed their anger at the delay in NEET-PG admissions. Demonstrations were held in various parts of the country.