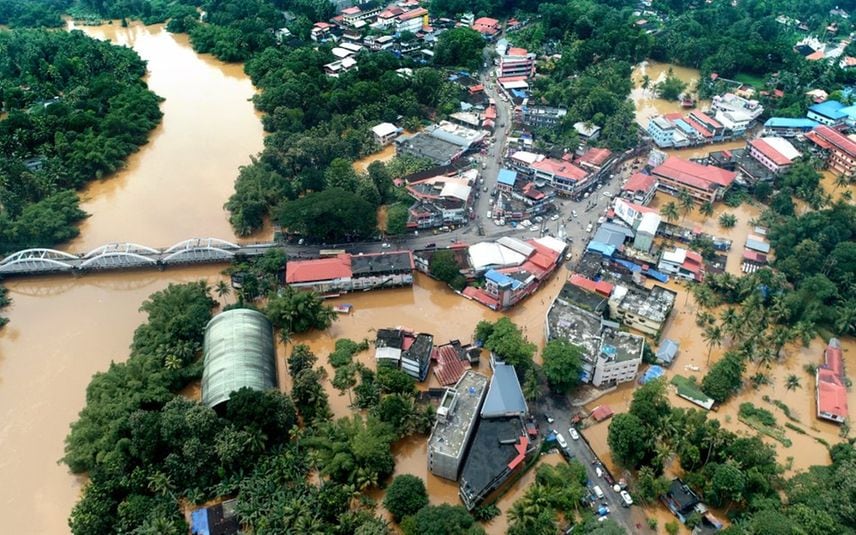 Kottayam: Manimalayar river, the catchment areas and banks are experiencing the worst flood in the last 64 years. Though the river overflowed during the floods in 2018, it didn't trigger a major flood. The senior citizens here recollect that the current flood is a repetition of the floods that occured in 1957.

As per the records of the India Meteorological Department, Kanjirappally station limit has received 266 mm rainfall from October 16, 8 am to October 17, 8 am. Meanwhile, Peermade station limits close to this place recorded a rainfall of 292 mm. It is assumed that heavy rainfall in a particular region is due to the presence of cumulonimbus clouds. Cumulonimbus clouds are thunderstorm clouds that form if clouds continue to grow vertically up to 17 kilometres above the ground. These clouds will bring heavy downpours, lightning and thunder.

The incessant rains flooded Kanjirappally town for the first time in history. Even two-storeyed houses were inundated at Moongani junction in Manimala. It is for the first time, we are facing such a flood, said a native Kalarikkal Anil Kumar.

Kottangal Gopinatha Pillai, another native who fought many legal battles for Manimalayar recollected that his father Narayana Pillai took him to the temple compound when Kottangal submerged during the floods in 1964.

Compared to the floods in 2018, Kottangal experienced the worst flood this time as the water level rose by 15 ft. A small bridge across Manimalayar at Cheruvally and a hanging bridge at Vellavoor were washed away in the floods.

If rainfall is recorded above 205 mm, it will be regarded as extremely heavy rain. Such rainfall resulted due to the cumulonimbus clouds. It is reported that these clouds are formed due to the rise in temperature level in the Arabian sea. At present, the temperature level in the sea is recorded at 29 degrees celsius. Usually, it is recorded from 26 to 27 degrees celsius, said MG Manoj, a scientist at Advanced Centre for Atmospheric Radar Research (ACARR), CUSAT.

The mud may turn weak due to the incessant rainfall at Kanjirappally and Peermade. As extremely heavy rain lashed the area, it triggered landslide, he added.