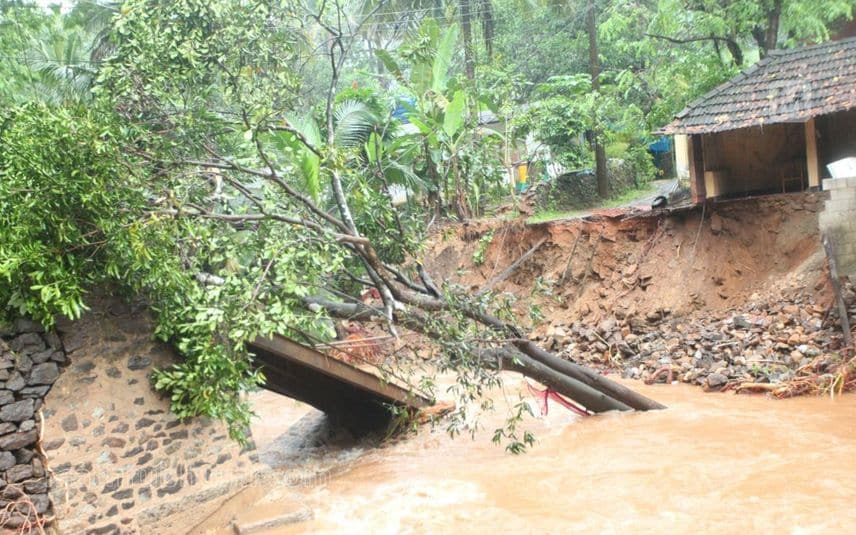 Kottayam: The death toll in rain-related accidents touched 6 in Kerala. Heavy rains pounded south and central Kerala on Saturday wreaking havoc in many parts with some people feared missing in the landslides that occurred in hilly areas bordering Kottayam and Idukki districts.

4 people were killed and 9 went missing in the landslide at Koottickalin Kottayam. Two including a man and woman were killed after a car was swept away in Thodupuzha.

Meanwhile, the heavy rains triggered a landslide at Kokkayar in Idukki. As per the reports, 7 people went missing in the landslide.

The Chief Minister's Office has informed that help from the Air Force has been sought for rescue in the hilly areas bordering Kottayam and Idukki districts where landslides have been reported isolating a few families.

In Idukki, the authority expressed concern over the rise in the Idukki dam’s water level. At present, the water level is recorded at 2392.88 ft. If the water level rises to three feet more, an orange alert will be sounded in the area.Heavy rains are continuing to lash the catchment area of the dam. Meanwhile, tourist spots in the area were closed due to the bad weather.

In Thiruvananthapuram, hilly areas have been receiving incessant rains. The water level is rising in the Vamanapuram river and Neyyar river. Tribal hamlets at Amboori were stranded. 27 families have been shifted to the relief camp at Vellayani.

Nehardeep Kumar, a Jharkhand native went missing after getting trapped in the floodwaters at Kannammoola.

At present, IMD has sounded a red alert in 6 districts including Pathanamthitta, Kottayam, Ernakulam, Idukki, Thrissur and Palakkad districts.

A CMO release said, "six teams of NDRF have been deployed in six districts--Pathanamthitta, Idukki, Alappuzha, Ernakulam, Kottayam and Idukki. Two teams of the Army have been directed to be deployed in Thiruvananthapuram and Kottayam districts. Airforce has been requested to be on standby in case of any emergencies."

The CM also said a Red alert has been sounded for the dams under KSEB, including Kakki dam in Pathanamthitta, Sholayar in Thrissur, Kundala and Kallarkutti in Idukki.

A red alert has also been issued for Chulliyar dam in Palakkad and Peechi dam in Thrissur, which are under the irrigation department.