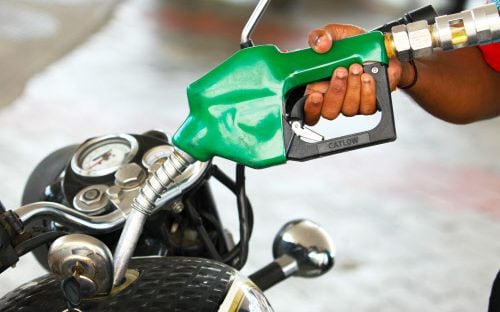 Thiruvananthapuram: After the sixth consecutive day of fuel price hike, the cost of one litre of diesel crossed Rs 100 in Kerala on Sunday, resulting in criticism of the Centre from various quarters, including the Congress.

Petrol price was hiked by 30 paise per litre and diesel by 35 paise a litre, according to a price notification of state-owned fuel retailers Prices differ from state to state depending on the incidence of local taxes.

Leader of Opposition in the Kerala Assembly, V D Satheesan said the rise in fuel prices was an example of 'anti-people politics' to exploit the public which was already reeling under the effects of the prevailing COVID-19 pandemic. Satheesan, in a release, opposed the hike in fuel prices saying it was "a crime against the people of India".

He said the increasing petrol and diesel prices will have a cascading effect on other spheres of people's lives making it even more miserable. The Congress leader said the central government was daring to do so as it was convinced it can turn around the votes of the people by debates on communalism and excessive nationalism.

The hike in fuel prices was also flayed by the Democratic Youth Federation of India (DYFI), the youth wing of the CPI, which said at a time when the country was facing the COVID-19 pandemic, exorbitant taxes were being imposed on petrol and diesel, thereby increasing their prices. It said, in a release, that the union government appeared to be working in the interests of the corporates and oil companies and not the people.

It further contended that the rise in fuel prices would affect all walks of life and would also impede the country's economic growth. The hike in fuel prices would also adversely affect a consumer driven state like Kerala, DYFI said. Meanwhile, the Kerala State Road Transport (KSRT) Employees Association -- a part of Centre of Indian Trade Unions (CITU) -- said in a release that it would be holding protests at 100 centres over diesel price crossing Rs 100 in the southern state.

Despite the multi-million crore subsidy bill, the country had implemented various flagship projects, including the Mahatma Gandhi Employment Guarantee Scheme, the Food Security Act and the Right to Education Act, worth lakhs of crores of rupees, he claimed.

However, now subsidies have been completely eliminated and despite plummeting prices of crude and multi-billion rupee revenue increase for the Centre, it was "robbing" the people with taxes with no people-centric project in place, Satheesan alleged. He further said when Manmohan Singh was at the helm of the central government, fuel prices were fixed on the basis of global crude rates and when that plummeted, the people benefitted.