The senior BJP leader also took a dig at Rahul Gandhi's two-day visit to Kerala by terming it as "political tourism". 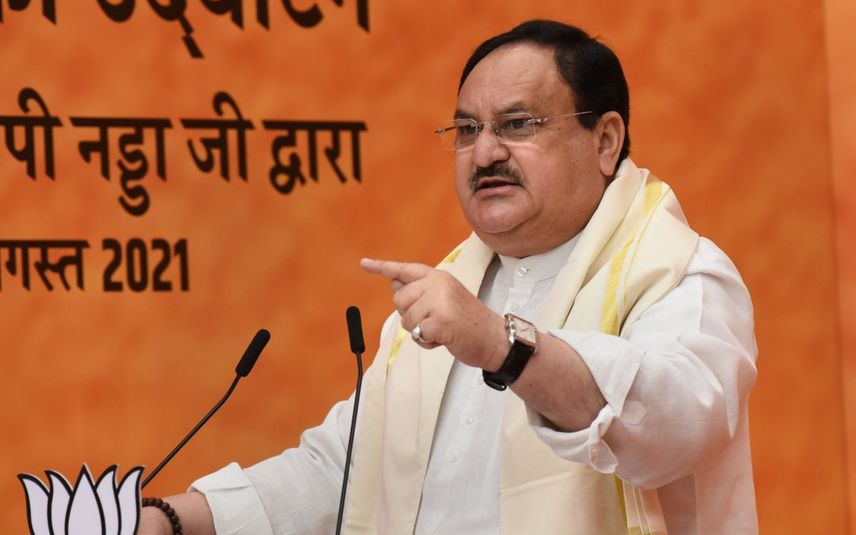 Kozhikode: BJP National President J P Nadda on Tuesday flayed the COVID management and the law and order situation in Kerala and blamed the Left government's "political attitude" for the crimes against women, alleged operation of terror cells and increasing coronavirus cases in the state.

Speaking at the virtual inauguration of a BJP district office in Kozhikode in Kerala, Nadda also accused senior Congress leader Rahul Gandhi of 'politicising' the rape and murder of a nine-year old Dalit girl in Delhi by tweeting the victim's family's pictures and said his Twitter account should be locked.

The senior BJP leader also took a dig at Gandhi's two-day visit to Kerala by terming it as "political tourism".

He began his speech, at the event, by stating that despite all the support given to the southern state by Prime Minister Narendra Modi, Kerala was not functioning as it was supposed to. Nadda said there was no COVID management, but only "mismanagement" in the state which on an average has been seeing 20,000 fresh cases everyday and was accounting for more than half of the country's caseload of new infections each day.

He said that the burden of COVID mismanagement in the state has become a burden of the country and asked "where has the Kerala plan of COVID management gone?"

Comparing the percentage of people infected in the state till date with that of Uttar Pradesh and Madhya Pradesh, Nadda said the northern states fared very well in their COVID management.

One of the reasons for the high number of COVID cases in Kerala was that the state initially went for Rapid Antigen Testing (RAT) and it was much later that it opted for RTPCR tests, he said.

Referring to the recent visit of Union Health Minister Mansukh Mandaviya to Kerala and the media reports that he lauded the COVID management measures of the state, Nadda said the minister would communicate his views to the concerned officials and authorities and not to the reporters and merely because he did not point out any shortcomings, does not mean there were none.

On the law and order situation in Kerala, the BJP president said it has gone "haywire" in view of the number of rape cases, targetting of women and children, presence of terror modules and the alleged "involvement" of the Chief Minister's office (CMO) in the gold smuggling through diplomatic channels case.

He also alleged the CMO has not been able to come out of the shade of the gold smuggling case. Nadda further claimed that Kerala was now "being identified by terrorist modules operating in various shapes, gold smuggling and as an ISIS recruitment centre".

He also said the police has become a mute spectator to all this and was viewing cases "through a political prism or lens" as it was allegedly dealing with matters on the basis of the political affiliations of the persons involved.

Apart from these, the other problems in the state were -- Kerala's development being "hampered" and coming to a "stand still" by the "political culture" prevailing here for the last 30-40 years and the huge economic debt of around Rs 3.5 lakh crores that the state was under, Nadda alleged. He further alleged that due to the "hostile political attitude" in Kerala, existing industries were locking up and trying to flee. New industries were not coming up and there was no scope of employment in the state which was evident from the fact that a large number of the populace goes outside the state for jobs.

Claiming that various central government schemes were also not being utilised by Kerala, Nadda expressed hope that the Rs 267.35 crore allocated to the state for strengthening its healthcare infrastructure and preparing for any third wave of COVID-19 would be "properly utilised". "The Central government wants to bring Kerala into the mainstream, but the present state government was posing hindrances to development," he said.

Covid ex-gratia: List of those who haven’t received payment to be prepared