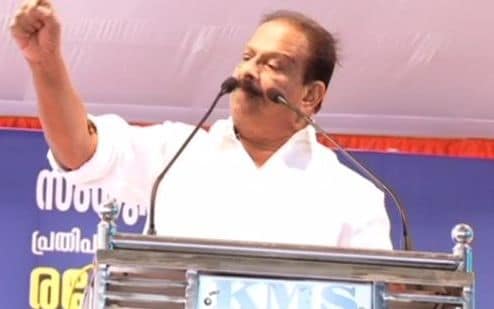 Kannur: Senior Congress leader and Kannur MP K Sudhakaran on Wednesday reportedly made some unsavoury remarks against Chief Minister Pinarayi Vijayan, harping on his family background and being the first CM " to buy a helicopter for travel", comments which were denounced by a party MLA.

He made the remarks at the Thalassery leg of the opposition Congresses led UDF's "Aishwarya Yatra'.

The UDF had launched the 22 day state-wide rally from Kambala on January 31 to highlight the 'misrule' of the ruling LDF.

"Pinarayi Vijayan, who held the revolutionary flame of the working class from a family of toddy-tappers and led you from the front, holding the red flag, where is he now?," asked Sudhakaran,.

"Pinarayi Vijayan, who hails from the family of toddy-tappers, travels by helicopter after he became the chief minister and will be remembered as the first CM from the working class to use a helicopter," Sudhakaran said.

He asked whether CPI(M) workers were feeling 'ashamed' over this.

Sudhakaran's remarks drew disapproval from party leader and Alappuzha MLA Shanimol Usman, who told reporters it was 'unfortunate' and that he should withdraw the statement and tender an apology.

Neither the Chief Minister nor the ruling LDF reacted to the remarks.

The Chief Minister had to face similar remarks when the Left government decided to implement the September 28,2018 Supreme Court verdict, allowing entry of women of all ages into the Sabarimala temple.

Earlier in 2019, BJP state vice-president M Sivarajan had said that it would have been better had Pinarayi Vijayan "gone back to toddy tapping" instead of being the Chief Minister.

During the initial protests against the state’s decision to implement the top court order, a local lady in her 50s reportedly used a derogatory term to denote Pinarayi Vijayan’s caste, a video of which went viral.

She later shot a video apologising to the Chief Minister.

Prior to that, ‘Janmabhoomi’, a BJP mouthpiece, had also carried a cartoon, referring to his caste of traditional toddy tappers and implying he was unfit for the job.

However, Pinarayi Vijayan had brushed aside these remarks, saying the saffron party always reminded him of his caste and expected him to follow his family's footsteps, but that times had changed, a new era has come about and they would have to understand it.