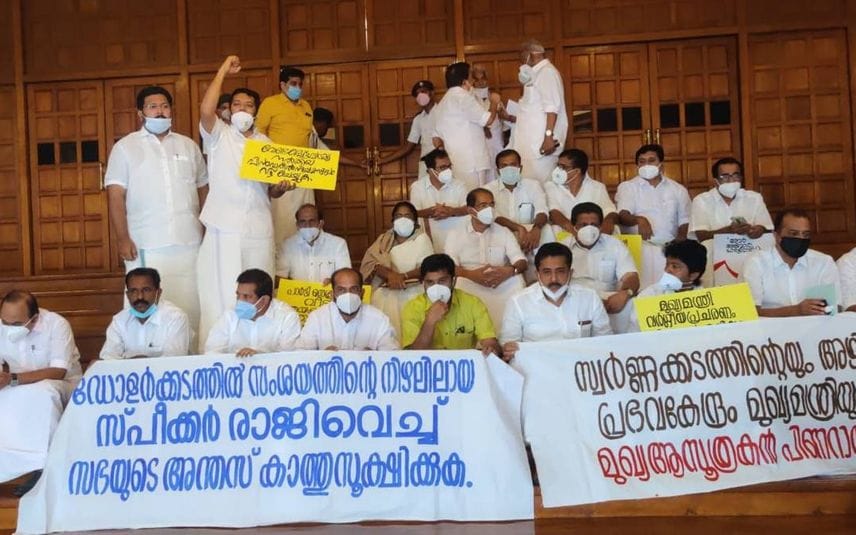 Opposition members stage protest at the entrance of the assembly house

Thiruvananthapuram: The UDF-led opposition boycotted the assembly session on Friday protesting against the government over the gold and dollar smuggling cases. Meanwhile, BJP’s lone MLA O Rajagopal continued to attend the session.

The opposition including PC George boycotted Governor’s policy address and staged a protest outside the assembly hall.

The opposition started the protest with the commencement of the session.

The UDF members created a ruckus in the house with placards, banners and slogans against the government and speaker.

Despite sloganeering, the Governor began his speech on time detailing the achievements and performances of the lone Left government in the country in its over four and half years' tenure.

As the sloganeering continued, a visibly irritated Arif Mohammad Khan asked the opposition members three times to allow him to fulfil his constitutional duty, but his plea fell on deaf ears.

Though Opposition Leader Ramesh stood up and tried to speak in between, the Governor did not yield to his demand.

The protesting opposition legislators later walked out of the Assembly hall and staged a sit-in at its portal, raising slogans and displaying banners and posters.

Meanwhile, the Governor, who continued his speech, said the LDF government has been facing challenges ever since the Covid-19 pandemic struck.

Detailing various pro-people measures taken by the Pinarayi Vijayan government, the Governor said the state started community kitchens for the needy to ensure that none went hungry during the lockdown, ensured that treatment for Covid-19 is being given free, and kits are being distributed to all ration card holders.

Kerala was also the first state to announce a pandemic relief package of Rs 20,000 crore.

The southern state also declared floor price of 16 vegetables produced in the state, he said.

Almost 9 per cent of the state's population is living abroad and with nearly six lakh immigrants returning due to the impact of COVID19, it will hamper the flow of remittances, causing a severe impact on the state's economy, he said.